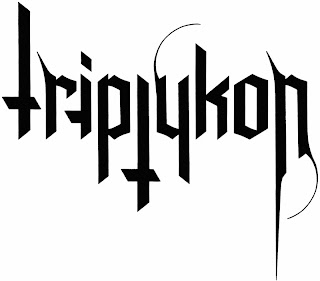 Tom G. Warrior was the main man behind the ugly monster of Hellhammer and then now-über-cult Celtic Frost. Since their way was always the painful and hard one, the band was finally laid to rest in 2008. It didn't take Tom much time to go hell and back and bring another horror being to life – Triptykon. Songs that were included on 2010's “Eparistera Daimones” album and “Shatter” EP were originally written for the next Celtic Frost album. Triptykon is an extension of all his previous work, but brought to a new level of dark disturbing riff-worshiping metal. I spoke to Tom about the band.

You are much older than the rest of Triptykon members. Did you have sort of mentor-pupil relationship at the beginning?
Tom: We treat each other equally. Our relations are healthy because there are no ego problems like we had a lot in Celtic Frost. Triptykon is free from that. The way we got to know each other came out pretty natural. Our bass player Vanja was a good friend's friend, so we were aware of each other before. V. Santura was playing guitar with Celtic Frost for the last couple of years of the band's existence. Actually, the only new guy was our drummer Norman. Maybe at the beginning there was a little bit of what you called a „mentor-pupil relationship”, but soon it didn't matter anymore. The age factor is not important since we became a band of close friends. 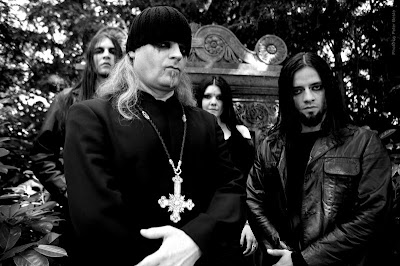 Norman used to play with Fear My Thoughts, a band originally connected with the hardcore/metalcore scene. Are you interested in checking out younger bands?
Tom: My life is heavy music but that doesn't mean I'm limited to metal. I'm interested in other genres and sub-genres of heavy sounds. There are so many bands around right now that it's really tough to check them all out. It's easy to miss out on something good too. Fear My Thoughts split up two years ago but Norman has another band going called Pigeon Toe. I have seen them playing live. It's got lots of groove. It's something I'm interested in not only because it's Norman's band.

Organizers of the Roadburn Festival asked you to choose bands that you respect and invite them to play live in April 2010 during the festival. Among them were Altar of Plagues, Thorr's Hammer, and Church of Misery. The thing was called „Only Death is Real”. How did it work out?
Tom: Roadburn people who are friends of mine came to me with that opportunity, which was a great honor. Once in a lifetime chance. I was asked to prepare a list of bands that are important to me and made an impact on my life. As you can imagine, the list was very long. Not all the bands could come to play of course. That wouldn't be possible. Shamefully, Jesu and Evoken were canceled because of the volcano eruption in Iceland. The truth is I couldn't see all the gigs on that day because I was also busy with interviews and my own set with Triptykon.

„Procreation (of the Wicked)” and „Dethroned Emperor” are monumental songs that are totally significant to the history of metal and probably inspired a thousand bands. Are there any stories or anecdotes regarding their creation?
Tom: The very first song I did for Celtic Frost was „Procreation”. The funny thing is I never write songs during the jam. I was always doing them at home. Creating the riff myself, recording it on the cassette first and later bringing it to rehearsal where we all worked on it. This time it was different and the song was an outcome of a jam, which was very unusual.
When we started Celtic Frost in 1984 we didn't have any material written and ready yet. I was so eager to do something that I decided to bring some older Hellhammer stuff and worked on it just to keep playing and creating. „Dethroned Emperor” was a newly developed and re-written version of the song called „Power of Satan” off the Hellhammer demo „Triumph of Death”. When you listen closely to it you can hear that riff, which I borrowed and built the new song on.

As a massive Black Sabbath fan, how did you like the Heaven & Hell album „The Devil You Know”? Have you ever met the big man, Ronnie James Dio?
Tom: Unfortunately we never met but I really hoped it would happen in the future. It's a huge loss. From what I heard he was a very wonderful human being, which in music and especially the heavy metal music business is really unusual.
To be frank, I was little disappointed with „The Devil You Know”. I was counting for more complex song-writing and lyrics. I was blown away by the song „The Devil Cried”, which they wrote and played earlier but it didn't go on that album. I need to say that Dio-era Black Sabbath and records like „Heaven and Hell” and „Mob Rules” made an absolutely great impact on my life when they came out. I prefer them over „The Devil You Know”. Tony Iommi never wrote a bad album anyway. His worst work is still hundred times better that anything I have done myself. 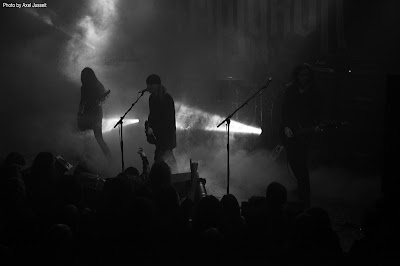 Where do you live in Switzerland and what is your neighborhood like?
Tom: I was born in Zürich but then my parents divorced when I still was a kid and we moved with my mother to Nürensdorf, a small city 15 kilometers from Zürich. Right now I live just outside of Zürich, in the neighborhood I would never expect myself to live. It's clean, quiet and rather full of older people. I have here all the peace and anonymity I need. That’s where I write all my music and where I wrote my books.

You often say Hellhammer and Celtic Frost used to be ridiculed a lot in the past and that there were only a couple of people that gave you support. Now people start giving you appreciation awards and saying how much your bands were always important to them. Do you think it's sincere?
Tom: Good question. You need to know that there are lots of people that still really hate me and it's not only for musical reasons. There are some envious and jealous individuals. My music was always provoking extreme reactions. That award you're talking about was a nice thing but it seems so much surreal. I don't create music for any awards, just for myself. Thinking from that point of view, I honestly don't care about awards etc.

The formation of Hellhammer in 1982 was a manifest of your hate and anger. Is it still the driving force behind the creative process almost 30 years later?
Tom: It's a different form of anger today. Hellhammer was an escape from a difficult youth I had. Now, as an adult, I don't need to escape anymore. What pushes me now is the frustration and hatred against human kind and its deeds.

Many bands admit being deeply influenced by your music. Do you hear Hellhammer or Celtic Frost in other's music?
Tom: I don't see myself as so influential and important. It's difficult to hear such things in other's music. Once, though, in a record shop in Zürich around 1998 some music was played through the speakers. In the first reaction, I was sure it's Celtic Frost, only seconds later finding out it's not but the sound was so similar. I was astonished, so I asked about it. It was Darkthrone's „Panzerfaust”. I immediately got into their stuff. Later, when I met the guys, I spoke about it to one of them, Nocturno Culto, and he confirmed they had a heavy Celtic Frost influence. 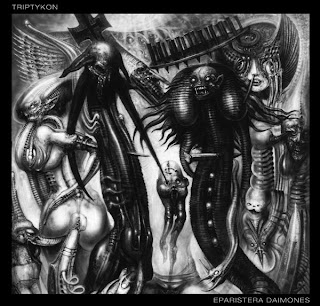 There is a video coming out to a Triptykon song called „Shatter”. Behemoth has been doing some really top-produced pictures lately. Did you like them?
Tom: The video we shot for „Shatter” will be quite different than anything else since the song is a mixture of rather delicate melody and harsh heavy metal sound. Like the one we did for „A Dying God Coming Into Human Flesh” a few years back, it's going to be done with much attention.
I admire Behemoth. Their videos are fantastic. Nergal actually is a friend of mine and we share the same passion for music. We both put a great deal of effort into how we present our work visually and musically.

You took a part in Dave Grohl's project called Probot in 2003 by co-writing the song “Big Sky”. Did you work in the studio together?
Tom: We corresponded directly but actually never met in the studio. He approached me about the whole thing. Saying he was a big Celtic Frost fan. The song was done by mail. I recorded my vocal lines in Switzerland and sent the stuff over to him to US. Later on there was an occasion to do the song live during one of Foo Fighters gigs in Europe but at the end it didn't work out.

Triptykon is playing almost a month-long tour in the US in October 2010. I'm rather concerned about Europe, to be honest. So, Tom, do you have any plans? There are some hungry fans waiting for your band in Poland!
Tom: I'm not so much excited about the US either (laughing). Yes, definitely we want to do a large European tour. Most probably in spring 2011. I would really love to return to Poland since the gig with Celtic Frost in 2007 in Katowice was one of our best experiences. I'm very much counting on coming to your country again!
Posted by Travis Bickle at 20:01