HAIL OF BULLETS – Messengers of Destruction

Bringing back the old school death metal vibe became a bit of an underground trend in the last couple of years. But who does it better and more sincerely than the old school bastards themselves? If names such as Asphyx, Gorefest, Pestilence or Thanatos mean something to you, the Dutch supergroup Hail of Bullets should have been on your wall since its formation in 2006. Two releases in that period – their debut „...Of Frost and War” and sophomore „On Divine Winds” – filled the gap before the new Bolt Thrower record with massive riff-work, war drums and the voice of ex-Thrower frontman Martin van Drunen. Drum master Ed Warby tells the story of the band.
Hail of Bullets achieved quite a reputation in a short period and became a pretty important band. Did you start HoB with the intention of doing anything else apart just one album?
Ed: When we started the idea was to get a good record deal as fast as we could and take it from there. At the time Gorefest was still my main band, and HoB a fun thing on the side. Gradually this changed until it got to the point where I enjoyed being in HoB more than Gorefest and I think the band exceeded the other guys’ expectations as well, so the mission was extended indefinitely! 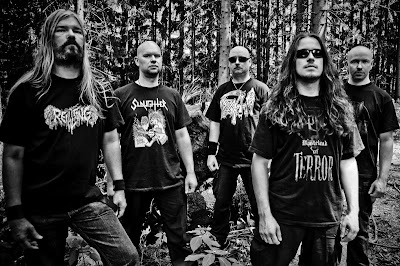 Stephane Gebedi started with Thanatos in 1984, Martin van Drunen joined Asphyx in 1990, Paul Baayens was with Cremation from 1993, Theo van Eekelen and Judgement Day started in 1988, you and Gorefest kicked off in 1989. To summarize the above – you are a band of the old death metal bastards who dedicated their lives to brutal extreme music. Does it still feel the same way as in the early days?
Ed: No, not at all. Back then it was just about the music, the underground was extremely active and the whole atmosphere was carefree and inspired. Nowadays it’s more about image and marketing, of course we don’t play along with that cause we’re old fuckers! One of the reasons for starting HoB was to bring back the old school vibe, well-crafted songs and riffs, and real brutality instead of just trying to be the fastest band alive.

Compared to your original bands, was formation of Hail of Bullets a different process? Did you talk about it with the guys a lot in the past or you just met over beer and started writing songs straight away?
Ed: I know Steph had the idea for a long time and he basically hand-picked the other guys. The formation was very different because we didn’t really know each other, and to solve this we decided to go out drinking first. We had a great night and the chemistry was obviously there, so the next morning we got out a camera and took our first bandshots without having played a note together! Fortunately I had a bunch of songs and riffs that were perfect for this new band and the rest as they say is history.

Was there anything to improve on „On Divine Winds” compared to the first record? Could it have been your first album and „...Of Frost and War” your second?
Ed: The improvement is in the details, stylistically we’ve moved toward a slightly more epic, majestic sound but most of the progress can be found in the arrangements, vocal lines, production/mix etc. To me „...Of Frost And War” sounds a bit rawer, while „On Divine Winds” has a more professional sheen to it. I don’t think they’re interchangable as such.

Did the concept of „...Of Frost and War” come first or did you write some songs and only then decide to make it a war-on-the-eastern-front-themed album?
Ed: When Martin heard the first demo I made he said it sounded like war, and since he’d always wanted to do a concept album about the Eastern Front the whole thing evolved naturally. One of those early songs was „General Winter” and the combination of music and lyrics worked so well on it that we continued in the same direction with the rest of the material. Because of this we were able to fine-tune the songs to Martin’s outline for the concept, which made it a very coherent album instead of the pretentious mess it could have been.

Who writes the lyrics for Hail of Bullets and is there much historical research involved in the process?
Ed: Martin writes all lyrics and his research borders on obsession, he literally devours tons of books and documentaries and even went so far as talking to actual veterans for the first album and visiting the US fleet for the second. One of the greatest compliments we received was from a history teacher who used „...Of Frost And War” for one of his lessons. How cool is that?

What are the chances for a HoB album focused on Operation Overlord? If not, what other theatres of World War II are in your sights?
Ed: I think Martin would find that too obvious and therefore not challenging enough, right now he’s focusing on another aspect of the war that should make a good concept but I can’t tell you what it is yet... don’t want to see a Sabaton album next year with the same theme, haha!

You have gathered an impressive collection of sexy female fans to present the HoB merch on the band's myspace page. Did they start sending the photos themselves or did you have to make them do it somehow? How can women get attracted to such filthy sounds anyway?
Ed: It’s amazing isn’t it? That’s mostly Stephan’s project, I think it started with the girl that inspired our first girlie design and more girls contributed. That’s one major difference with the late 80’s/early 90’s, women at death metal shows, and lots too! 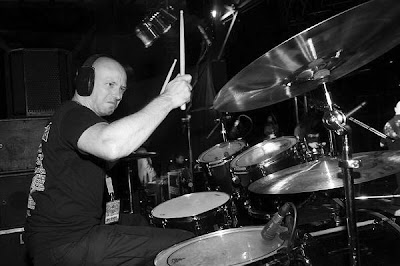 I need to ask you about the „Warsaw Rising” EP as I'm Polish. Putting all the heroism and bravery aside, do you think it was a good decision to give the order for the Warsaw Rising in 1944? There is a theory saying that if the Poles didn't fight, a whole generation might have been saved (over 200.000 people died in the rising in fact).
Ed: I wish I could say something sensible about this, and I did read some about the background when we released the EP, but I don’t know a fraction of what Martin knows about this. I do think it’s impossible to look at this without taking heroism and bravery into account, better to die on your feet than to live on your knees... but that’s easy for me to say, I wasn’t there and neither were my (grand)parents. In the grand scheme of things it was a major event, even if it wasn’t successful strategically.

The Metal Archives website names twelve bands that you have been involved in over the years, which is probably some sort of a record if you don't count Dan Swano. What moments of your career would you consider as your high-points?
Ed: Really twelve? That’s probably including my very first band that I started when I was 12, haha! I guess my past is just more well-documented. My years with Gorefest are obviously a high-point, the Dynamo Open Air Performance (captured on the „Eindhoven Insanity” CD) and the US tour with Death in particular. The Star One (Ayreon) tour we did in 2002 was an incredible experience, and lastly I should mention the first The 11th Hour gig in 2009 at the Dutch Doom Days. That was the first time I ever went on stage with a guitar instead of drumsticks and I died a thousand deaths but I loved it. It was a very emotional show because my sister was in the audience and much of the album is about her and our parents (r.i.p.) and as long as I live I will not forget that night.

You're one of not many death metal drummers using headphones during live shows. How do they better your performance?
Ed: Actually, they’re not headphones but ear protection. With Gorefest I used real headphones for in-ear monitoring but I couldn’t get used to it. I have a massive case of tinnitus (damage caused by noise) and since I don’t play well with earplugs I accidentally discovered that wearing headphones works really well for me. The ones I use are specifically made as ear protection for drummers, they don’t have speakers. It may look funny, but at least my hearing won’t get worse than it already is.

Did you see the HBO war mini-series „The Pacific”? Why the fuck didn't you get to sell „On Divine Winds” as a soundtrack to it?
Ed: Haven’t seen it, sorry. When we started working on the „On Divine Winds” album I read about the series, it just started in the US then. At first I was kinda bummed about it because people would think we were inspired by it, but then I figured it couldn’t hurt. I don’t think Steven Spielberg would like to use a death metal soundtrack though. 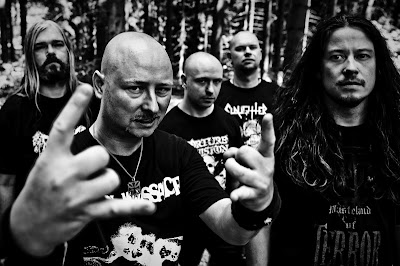 If I say that Hail of Bullets is the greatest tribute to the Bolt Thrower style, what would your reaction be?
Ed: I think we’re more of a tribute to the classic death metal style, but to me Bolt Thrower is the ultimate death metal war machine and I can’t deny they’re a big influence. But so are Autopsy, Entombed, Celtic Frost, (early) Death, Massacre, etc.

Your other band The 11th Hour is a traditional doom effort. Have you always been a fan of a slower and more atmospheric vibe? What inspired you to start The 11th Hour? Eleven other bands were not enough?
Ed: Yes, ever since I heard Trouble and Candlemass I’ve loved doom. Never thought about making it myself until I started playing guitar though. The 11th Hour was inspired by Rogga Johansson (my Swedish doom partner) who wanted to do a doom project with me on drums, but it mutated into something very different and utterly personal. It’s a great way to deal with some stuff that’s been haunting me as well as indulge in the more melancholy side of my musical personality.

The 11th Hour is almost a one-man project because you take care of the all of the instruments and most of the vocals. What's the difference between composing for The 11th Hour compared to the way you work with HoB or Gorefest? Do you feel more free as you don't have to look to any other band-members?
Ed: The 11th Hour, for better or worse, is 100% what I want it to be since I make all artistic decisions and play almost everything. Writing for HoB is different because I have to take four other people into account and while I write about 70% of the music it’s obviously more of a group effort. Fortunately we have pretty much the same taste, something that was not the case in Gorefest so that was by far the most difficult band to write for. By the way, The 11th Hour exists on two levels, in the studio it’s just me and Rogga but since the release of the debut album “Burden of Grief” it has also grown into a live band featuring members of Officium Triste, Cirrha Niva and my ex-Gorefest buddy guitarist Frank Harthoorn. On drums I have my old friend Dirk Bruinenberg who already replaced me in Elegy in 1993.
Posted by Travis Bickle at 23:38