While Behemoth took its compulsory year-long break due to the band leader's illness, the unstoppable drummer of the Polish blackened squadron, Zbigniew “Inferno” Prominski, used the opportunity to complete the fifth Azarath full-length. The group, which delivers raw, vulgar and violent death metal, produced their strongest offering to date. "Blasphemers' Maledictions", released by the Witching Hour in June 2011, is a furious leviathan packed with outrageous tempos, an annihilating wall of brutal riffage and church-burning profanity. Inferno, much respected for his über-human drumming skills, spoke to We Wither about the new line-up, underground ideals and his hometown. 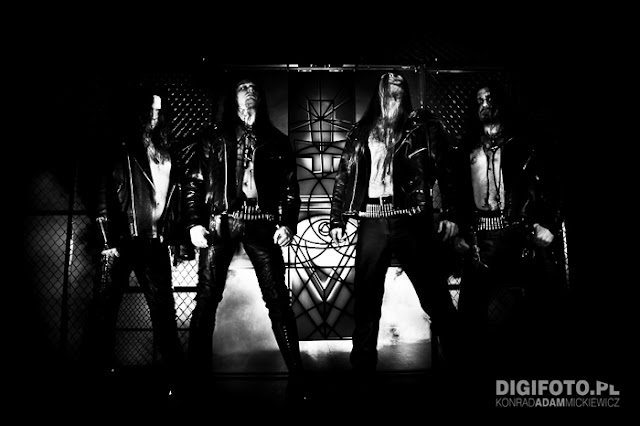 You started as a really deep underground band and made it to the death metal premier league. How much has changed since 2001’s “Demon Seed” album?
Our approach, values or ideas didn’t change even a bit. I’m glad to say that they are getting stronger and stronger all the time. We have progressed musically and you can clearly see that when you look at Azarath today. There is a new line-up, a new label and finally a new record, which raise a lot of sometimes radical reactions and emotions. They are right and if you also add our satisfaction to the scheme, then everything seems to be going in a good direction.

“Blasphemers’ Maledictions” is a big leap forward even in comparison with the great sound of your earlier albums “Diabolic Impious Evil” and “Praise the Beast”. How was this possible?
There are a few elements that are important in that context. One is the opportunity to work with some new people. Witching Hour gave us a chance to choose the studio to work at with no exact time limit. Second is Necrosodom, who puked out all the lyrics and some guitars too. Third is a cooperation with the great graphic artist Zbigniew Bielak, who did the cover art. Having the time off with Behemoth, I fully undertook the whole process of production of “Blasphemers’ Maledictions”.

Do you think Azarath contribute a lot of new elements to the genre or are you rather a homage to your death metal masters?
If you do your thing honestly with authenticity and total sacrifice, it automatically becomes an original and contributing act. We never wanted to stand out because of originality. The genre’s parameters are pretty much defined and leaning out of them would be out of order and a desecration. I don’t mean limiting ourselves or anything like that. Simply there are things Azarath will never do and I assure you we will never compromise. We stay loyal and faithful to the ideals of true death metal.

The new guitar player and vocalist Necrosodom and the bassist P. joined the band recently. Did they creatively contribute to writing “Blasphemers’ Maledictions”?
We wrote the whole album with the other guitarist Bart. Necrosodom is responsible for lyrics and vocal arrangements. He’s a wild animal in both the studio and on the stage and absolutely lived up to the task. His creativity and passion were very inspiring. I can’t imagine anyone else in the band instead of him. P. joined us while we were recording and his stage debut took place on September’s tour with Bulldozer, Witchmaster and Deus Mortem.
In spite of being involved in a lot of other bands, you have managed to produce five regular records in ten years. Is writing for Azarath that easy for you?
We write and record when we feel like it but once we decided to treat this band seriously we wanted to offer new material in regular spaces of time.

What was the impulse to form Azarath, what did it look like in the beginning?
The main motive for starting Azarath was my short break from Behemoth. I met Bruno, who I previously knew from another band – Delerium – we played with in the 90’s. Then we brought in Dlugi who played guitar in Cenotaph. We started practising the discipline of music and alcohol. Eventually Bart of Damnation joined too and that was the moment we actually became a regularly functioning band.

In September 2011 you played a nine-date tour in Poland with Bulldozer, Witchmaster and your new black metal project with Necrosodom called Deus Mortem, where you actually play guitar. In the previous years because of your commitments to Behemoth Azarath was usually performing with ex-Lost Soul drummer Adam Sierzega.
We have changed about three-quarters of the old live set. We mainly focused on songs from “Blasphemers’ Maledictions” and “Diabolic Impious Evil”. We had a new stage design and our shows were filled with brutality and mysticism.
Does Azarath give you more artistic satisfaction than Behemoth?
Yes, it does and I don’t think that’s anything shocking or difficult to understand.

Do Behemoth fans talk to you about Azarath when you meet them on foreign tours? Are they aware of Azarath at all?
We will very soon have an opportunity to properly introduce ourselves to a foreign audience because in December we are playing the Hatefest tour with Triptykon, Marduk and Kataklysm and within almost three weeks we will visit Germany, Austria, France, Belgium, and Holland.

Is drumming for Azarath and Behemoth different in any aspect?
The emotions and fatigue are pretty much the same. It’s tough at times but adrenaline helps me to get through the set with no problem. When I perform with Azarath, I’m sometimes pissed off with myself because I have written such sick and breakneck drum parts. On the other hand when I listen to our records I’m really proud and satisfied because I know that’s how it should sound.

In “Terrorizer’s Readers’ Poll of 2009” you were voted the drummer of the year. Does that mean your work on “Evangelion” is your top effort to date?
I don’t believe so. I think what I did on “The Apostasy” was way more difficult and demanding. I wouldn’t be able to entirely repeat those tracks at the moment. That session was one of the most murderous and exhausting experiences in my life. Plus I had a spine injury that wasn’t helpful at all.
You come from and live in the city of Tczew, which is located in Eastern Pomerania and has 60,000 inhabitants. Is it easier to keep a healthy perspective distance from a so-called career there?
I generally keep a very big distance from everything around and from myself as well. I’m aware of what I do and living in Tczew is no problem for me. Actually, lately I enjoy spending time in the outdoors more and more. I go to the forests of Kashubia whenever I have the chance and time to do so.
Posted by Travis Bickle at 16:32