The Boston-based quintet has been feeding the audience with the riff-ridden force of anguish and depression since 2005. Their debut “Untold Wait” and the follow-up “Asylum”, that hit the streets in May 2011, offer vast landscapes of sonic, crusty post-metal hardcore introduced in lengthy monuments of an overwhelming isolation. Morne’s veteran guitarist Jeff Hayward, whose legacy with Massachusetts sludge doom legends Grief and such records as “Come to Grief” or “…And Man Will Become the Hunted” speaks for itself, spoke to We Wither about his present and previous band. 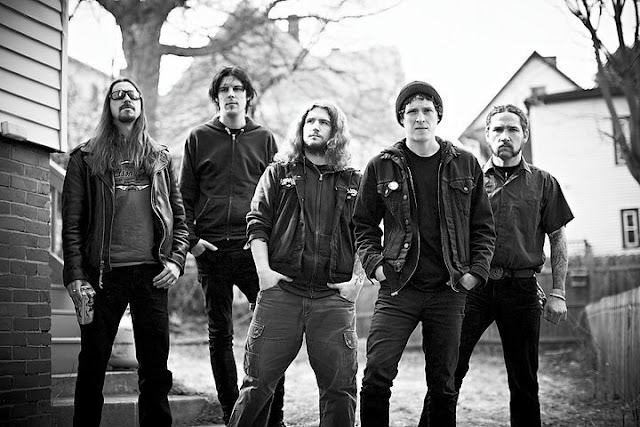 You went for a month-long tour in Europe in June and July 2011, which included more than ten countries. How satisfied are you with it? Did it make you stronger as a band?
I do believe the tour was successful. We played thirty something shows and only a few were lousy. Got to see many friends along the way and make many more. Plus with the second record just being released we felt it was important to hit the road. Also I do think it made us stronger as a band. It was the first tour with this line up and I think it's important for bands to tour and come together. Five weeks is a long time and obviously there are stressful moments but you work together to get through them. At the end of the day we all had a great time.

Your success is a style that combines different heavy sub-genres but it’s actually quite hard to label. How would you define your sound and aspects that make Morne what it is?
Not exactly sure how to label our band. We're just trying to write music with feeling. It's more than just down tuning and playing loud. We try to create music that is heavy but also has emotion. I believe we're heading in the right direction as far as where we want to be but not quite there yet.

Is there anything that Morne stands for, a theme or a thought that you would like to be its keynote?
As far as what we stand for, not really sure. Maybe Milosz has some thoughts about that, the band was his idea before I even knew him. I guess I would like the band to be known for creating heavy powerful music.
There are long instrumental passages in your music since Morne is based on the guitar force in the first place. Would you consider doing a full instrumental record?
Doing an all instrumental record… not sure. It's nothing we've ever discussed. I could see us possibly writing an instrumental song but probably not an entire album.

Are you devoting 100% of your time and efforts to Morne at the moment? Does it allow you to be a full-time musician without a contract with a major label?
Musically I dedicate myself to Morne 100%, but not 100% of my time. I work a full-time job putting in about fifty hours a week. As much as I love the band I certainly cannot make a living and support myself from it. Maybe someday but I'm not holding my breath.

How much did Morne grow from what you were doing with Grief? Do you think both bands have something in common?
I think the stuff we're writing with Morne is more involved than the Grief material. Especially since the addition of the keyboards, really trying to create atmosphere. The Grief material was more primitive, a little more straight forward. The bands are a little similar as far as both being heavy and slow but Morne will never be as slow as Grief.

You played with Grief in the nineties and recorded five studio albums that earned you a lot of respect in the scene. Was shutting the band down and establishing Morne like going back to basics? Was it the same sort of challenge with Morne as you had with Grief back in the day?
When I joined Morne they were already a band. They had already recorded and released the demo on CD which had created a little buzz about them. Morne has achieved popularity much easier than Grief did, we really struggled back in those early years.

Grief released splits with such cool bands as Corrupted, 13, Soilent Green, 16 and Dystopia. Did you get to know them and tour with them first and then decide to do something together or did it happen the other way around?
All of those bands with the exception of Corrupted we knew personally, I never had the opportunity to meet those guys. The 13 and Dystopia splits seemed fitting to do. We all knew each other and played similar music. The 16 split came about because both bands were on the same label. The Soilent Green one, don't remember how that one came about. Back in the early years we played many gigs with 13 in NYC. Played also with Dystopia when we toured the west coast and also played with them here on the east coast when they were touring. We did two tours with 16, one on the east coast and one on the west coast. Back in 1995 while on tour here with Extreme Noise Terror we hooked up with Soilent Green for about a week. Had some great times playing with these bands and made some great friends also.

How did it work in the early nineties when you started? Did anyone understand what you were doing? What bands in Boston were you hanging around with?
Back in the early 90's people in Boston didn't get what we were doing. There were some but for the most part we would play shows and nobody would show up. I think part of it might have had to do with the fact that four of the five original members were also in Disrupt. Maybe people were expecting one thing and got the complete opposite. Or Boston back then was a very hardcore city as far as music goes and we went a different direction.

Boston is quite well-known for its hardcore scene and such bands as Slapshot, Gang Green, Blood for Blood or SS Decontrol. Did Grief ever play for hardcore crowds?
No, back in the day we never really played for hardcore crowds. Also never played with any of those bands you mentioned. After the first few years we stopped playing Boston entirely. We were not well received here back then, we had more success playing out of state.

What records, events or experiences influenced the heavily slowed-down style that you created with the early Grief albums? Which extreme doom metal bands did you know in 1992-93?
We all listened to different types of music. Before Grief we all played in either a punk or metal band. I think that after Disrupt broke up we were looking to do something completely different from what we were all doing at the time. Just wanted to play slower, heavier music. Back then I personally was influenced by bands such as Black Sabbath, Saint Vitus, EyeHateGod, Sleep, Buzzov-en and 13. There are probably more but those were my favourites.

What do you consider a highlight in Grief’s history?
A highlight in Grief's history, that's a tough one. There were many highlights over the eighteen years the band existed. To pick just one is difficult. Let me put it another way, being a part of Grief is the highlight of my music career. We had our share of good and bad times but it's nice to know that after so many years people still appreciate the band and the music we created. I spent half of my life dedicated to Grief and I'm very proud of that.

A commonly cited reason for Grief’s break-up was “the hostile environment for doom metal bands”. Do you think you were ahead of your time?
Well that quote didn't come from my mouth. But in a way it rings true to a certain extent. I wouldn't say ahead of our time, there were doomy bands around back then. I just think doom metal in general really caught on and started getting very popular in the later part of the 90's. For me personally a big part of the band ending was the continuous line-up changes. It seemed every couple of years we had a different line-up. After a while it just starts to wear you down. It was like two steps forward one step back, over and over again. When it was all said and done at the end of 2008 I was the only original member left from when we started back in 1991. At some point you have to call it's quits and move on and it just felt like the right time for me.
Posted by Travis Bickle at 18:23 No comments: