COUGH - A Thousand Years in a Dopethrone

Records such as “Ritual Abuse”, which was dropped by Relapse in October 2010, are of a rare kind. They tend to grow on you, they become addictive, and they get deep under your skin and stay there. How you get rid of them I don't know, but I don't care and don't want to know. The doom underground scene across the whole world is talking about this four-piece unit from Richmond, Virginia and it's no empty chatter. Taking some serious inspiration from Electric Wizard, the band worked out an extremely depressive form of crawling and grievous doom metal, which definitely resulted in some of the best records of 2010. Vocalist and bass player Parker Chandler tells us how it really is.

What I like about the “Ritual Abuse” sound is the fact that production is not over the top, with everything down-tuned, brutal and loud to the limits. It has been done before, so why bother? Did you do this on purpose?
Parker: Raw, down-tuned, brutal and loud? Sounds like a good combination to us. Why bother fucking with a good formula? That's exactly what we wanted to accomplish. 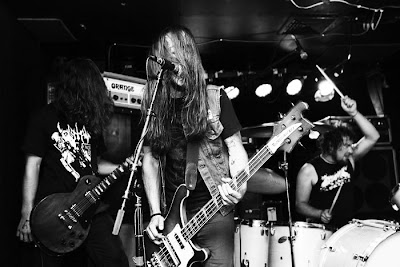 How did you come up with using an acoustic guitar in some parts? Was it originally written that way, or did you come up with the idea later in the studio?
Parker: “Crooked Spine” song was written by David [Cisco, vocals & guitar] as an acoustic song. It was never meant to be a Cough song until we all heard it and decided we could do something different while staying grounded in doom. Putting the acoustic on the album just seemed appropriate given the roots of the song.

When you started Cough in 2005 what did you want it to be?
Parker: The loudest, heaviest band in Richmond. 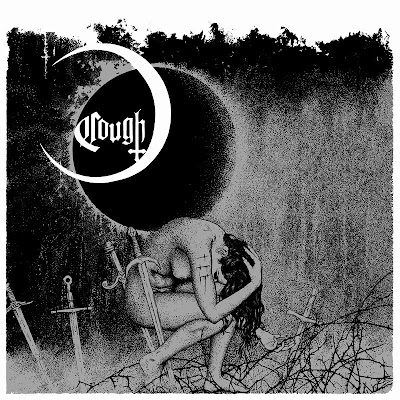 “Ritual Abuse” cover art is probably the best I have seen in years. Could you say something about the artist and the work itself?
Parker: Glyn Smyth from Scrawled Design came up with it. Conceptually, it fits with our theme of being trapped in a situation where any move you make will only hurt you but you can't sit still forever. He did a great job on the cover but I think he fucking killed it on the gatefold.

Do you care much about bands from Europe such as Electric Wizard, Hooded Menace or Katatonia? Do people in the doom/sludge/stoner scene in the US pay attention to European bands or they mostly stick to what's happening in America?
Parker: European bands are pretty big over here, at least in the doom scene. Americans love the European doom bands. More of them need to come over here and fucking tour with us.

Is weed an inspiration to you? A means to get creative and write music?
Parker: It is what it is. We've written as much music sober as we have blazed or drunk. It's not necessary to our creative process, we just enjoy it.

Did you read Ozzy's autobiography „I am Ozzy” that came out in 2009?
Parker: No. We like to forget that he survived the 70's.

There are some great bands from Virginia, where you come from. For example, Municipal Waste, Deceased, or Alabama Thunderpussy. Do you hang around with them or stay all day in hiding, worshiping the horned one?
Parker: We run into various Waste dudes from time to time. They're still in touch with the local scene. Asechiah (an original guitar player of Alabama Thunderpussy) is a fucking blast to hang out with and he's in a new band called Windhand. They kill it. I've seen Deceased a couple times but never hung out with them. We mostly hang out with the less successful crowd just because they're around more.

Your first 2008 album, “Sigillum Luciferi” was produced by Sanford Parker – the guy from Minsk, Buried At Sea, and Circle Of Animals. He sounds like an outstanding musician. Is he a cool guy too? How was it to work with him?
Parker: He was really cool to work with, that's why we decided to do “Ritual Abuse” with him too. His studio setup is very relaxed, in a good location, and he takes good care of you while you're there.

Is having an album released by Relapse a sort of a breakthrough for Cough?
Parker: It was enough of a “reward” to keep going. We probably would have given up if things didn't change.

Your “An Introduction to the Black Arts” split with an English band The Wounded Kings contains only two songs within 35 minutes between you. Could that song “The Gates of Madness” be on “Ritual Abuse” as well?
Parker: There wouldn't be any room for it. I guess it could have gone on the album but we wrote it specifically for the split LP.

You have played some shows with those proper doom legends, Pentagram and Trouble. How did it go?
Parker: It was cool but our two worlds (old school and new school doom) are very different. I love Pentagram and I like Trouble but neither band was the actual line-up, so it does take away from the experience. We fucking killed that Pentagram show though.

There are plans for quite a lot of touring in Europe in April and May of 2011. Are you coming on your own or with some other bands from Relapse? Catching any of the bigger festivals?
Parker: We're flying solo. Playing Thursday at Roadburn and the last show of the European tour is the Alerta AntiFascista Fest in Germany. We'll probably be playing with locals at most of the shows so I'm interested to see who's out there. 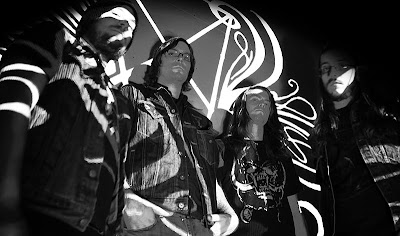 Your lyrics are depressive and very dark. Do you need to have a fucked up life to write them, or is it just getting into the genre's mood and atmosphere?
Parker: No. I wouldn't say that we have fucked up lives but that's not to say that we don't mean what we say. It's not even about being in a certain genre. It's not like we're putting on this act and projecting these negative attitudes, it's just us. I don't want to listen to happy songs and I don't think that there is any reason for people to write happy shit. That shit is for children who haven't gotten a grasp on reality. The truth is that you will be shit on for the duration of your life, you will experience loss and you will die. Make the most of it but never forget where we all end up.

If “Ritual Abuse” is included in Terrorizer Magazine's top of 2010 list, will you be excited?
Parker: It would be cool, I guess. The metal market is so saturated these days that it's probably hard for the magazines to pick out the true, no bullshit records. I also don't buy into a lot of what the magazines say because their funding depends on advertising. They can't bite the hands that feed them. I'd be more excited about ending up on some basement-dwelling, lifelong doom fan's top 10 list.
Posted by Travis Bickle at 19:33