THE ROTTED – Get Rotted or Die Rotting

After eleven years of existence, London die-hards the Gorerotted called it a day for a second and reformed as The Rotted, an even more powerful and pissed off grinding force. After delivering a stunning debut “Get Dead or Die Trying”, which contained such epic pieces of crusty blasting death metal as “Angel of Meth”, “Fear and Loathing in Old London Town” or “Nothin' But a Nosebleed”, the band offered the self-released EP “Anarchogram” and started working on the second album, which should be out in the middle of 2011. The band’s frontman and vocalist Ben McCrow answers the questions about their specific sense of humour, becoming independent and the London underground.

Could you remind me again: why did you drop the Gore- prefix in 2008? There isn’t such a striking difference in the music between Gorerotted and The Rotted.
You think so? It’s funny, some people think there’s a big difference, other people, not so much, but personally I think there’s been a huge leap forward with The Rotted material. Gorerotted didn’t really push any boundaries, we did what we did very well, but it was effectively just death metal, grindcore, whatever you want to call it. With The Rotted, the limits of Gorerotted have been cast off, and we throw a lot of punk, black metal and classic rock ideas into the equation. Tim and me are still left from the Gorerotted days, but we have Trud and Nate from Screamin’ Daemon in the band now, so to us, Gorerotted felt dead. The limited style wasn’t going anywhere else, the lyrical content had got very boring for me and we just wanted to leave Gorerotted as it was and move on. It was the truest move to make, and the only way we would feel we were being true to ourselves. It cost us some fans, it made us some new ones but most importantly, it’s allowed us to make the music we want rather than the music people expect us to make! 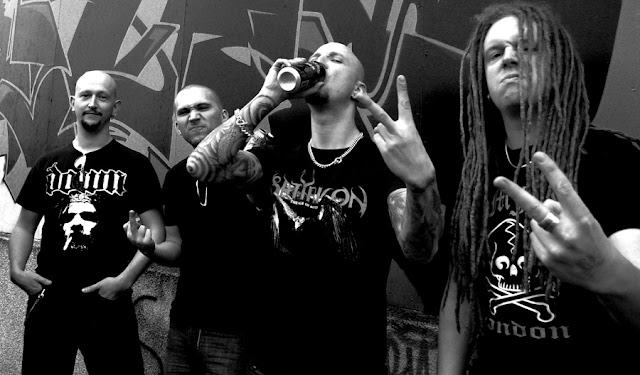 Metal Blade released the “Get Dead or Die Trying” album so I guess you have got some sort of a deal with them. Why did you publish the “Anarchogram” EP by yourself then?
We put out two Gorerotted and one The Rotted album with Metal Blade, but our contract is over so we won’t put any more material out through them. The idea of putting “Anarchogram” out ourselves was to return to our DIY routes and to have full control of all promotion, pressing and distribution. In the early days of Gorerotted, our friend did the artwork, we would hand out flyers at gigs and club nights, and we posted the discs out ourselves. We missed that connection with the fans that we had, and in this day of numerous labels and file-sharing, we just wanted to go back to the way we remember music when it was magical, not just a load of files people could download all at once!

I thought of your slogan “No Gods No Governments” as a reference to London, which supposedly has the biggest number of CCTV cameras in the world. Is living in London like being under surveillance?
That slogan is a reference to self-rule, self-belief and not serving anyone else’s purpose but to use your own judgement and common sense. It’s about not putting your trust in any higher power. But you’re right, there are far too many cameras here. The UK is one of the easiest places in the world to live, but under the surface, there’s so much control and yes, we are being watched. It’s true, London has more CCTV cameras than the entire state of California!

You like to take the piss. Most of your songs are a mockery of record or movie titles. Do you especially like the ones you mock or is there a different key to it?
We like subverting popular culture and playing with words and phrases, it’s part of our humour. A lot of bands are too serious all the time, and they take everything too seriously, which is fine if that’s how they are naturally, but for us, we like our personalities to come through in our music, so we don’t hide anything, everything is natural and real! No gimmicks, no bullshit, just honest and from the heart. 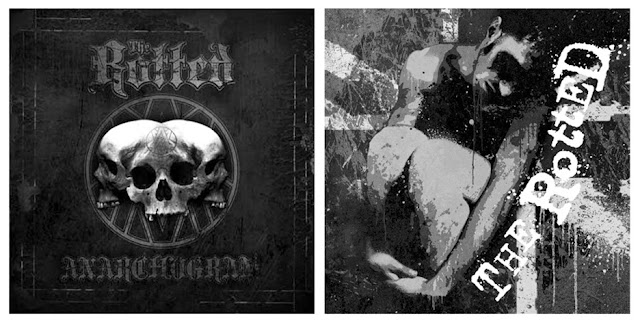 Is there anything you wouldn’t dare to mock or pastiche?
I wouldn’t say we’re mocking anything or anyone. There’s no personal attack on anybody, that’s not something I’m really interested in doing. A lot of people think the Gorerotted song “Masticated By The Spasticated” is me poking fun at the disabled, but it’s actually based on the scene in “Bad Taste” where the guy is in the cooking pot surrounded by those weird alien jokers. Gorerotted had a sick sense of humour, but as I approach 30, it’s not something I’m interested in anymore. The humour in The Rotted is a lot more subtle, but still very much there, because it’s a part of me. I have a very cynical, sarcastic sense of humour that’s typical of many Brits.

UK Subs released their 23rd album in January 2011. Do you see yourself doing extreme music at the age of Charlie Harper who is an incredible 67-years-old?
He’s 67!? Jesus, he looks good for his age! Charlie’s a living legend, he’s an icon, the Lemmy of the punk scene, and there’s very few of those kinds of people in music, proper lifers who don’t abandon their principles, but instead keep on doing what they were born to do. I think both those guys will make music until they drop dead, and fucking good on the pair of them! Me? Who knows, in today’s climate I’d be surprised if I was still doing this shit next year hahaha.

London is a massive pot of people from all over the world. Do you think mostly English go to see The Rotted live?
I think our audience represents London’s population pretty well, many English people, but also lots of Polish, Czech, Russian, South American, Indian, Italian and Spanish people too. London’s a good place for people to settle, and there are metal, punk and hardcore shows every night of the week, so it’s not surprising so many metalheads from around the world choose to live here.

What’s the progress on the new record? When can we expect it? Working title yet?
It’s all recorded, we’re just waiting for it to be mastered. I can’t give away too much, but what I will say is that it’s the perfect mix of death metal, black metal, d-beat and hardcore punk! No trendy shit, no stupid shreds or breakdowns, just kick-ass, heavy as hell, catchy verse/chorus/verse tracks!

Does working with a guy like Russ Russell behind the recording table make the process much easier? Does he give hints and directions about what you should change etc?
He’s a real asset, yes he does put his input in and if we had done it ourselves at the computer at home, the songs would still be great but they wouldn’t have come out as well as they have! I’d recommend Russ to any band out there, if he likes your music, he’ll put everything he’s got into making it a success!

Since John “Gian” Pyres left you’re a quartet. Does it make your new stuff simpler?
No, not at all, Tim has always been the principal songwriter. With no disrespect to Gian, most people tell us it’s better with just the four of us, we don’t need two guitarists with what we do, the whole thing’s tighter and it allows the bass guitar to really break through. The balance is just a lot better and everything runs a lot smoother now, which is why we didn’t choose to replace him. We didn’t want to upset the chemistry we have with each other –both personally and in terms of writing.

Do you practise a lot of your guttural growls? Don’t tell me it came to you as a natural talent!
I wouldn’t call my vocal style guttural anymore like the guys from Disgorge or Devourment, but when it was more like that, I found it a lot easier. Anyone can make a low rumbling sound with their throat after trying out a few techniques, but the sheer volume and aggression that I use now takes a million times more effort than before, and it really wipes me out! If I didn’t have such a good diet, or keep fit, I’d be fucked!I So lots of warming up before the show and keeping in good shape is the key! If you come off stage and you don’t need to collapse, then you haven’t given it enough effort!

Do you have any interest in football? What club do you support?
Not really, I became obsessed with music at a really young age so football never really stood a chance, but my granddad played for the West Ham United youth team and my girlfriend’s brother plays for Yeovil Town so those are the two clubs I like to win!

There is a pretty prominent hardcore London label called Rucktion. They release stuff like Six Feet Ditch, Knuckledust or Ninebar. Do you feel connected to that scene as well as the metal one?
No, not really. I’m a big fan of Knuckledust’s music and I’ve got a lot of respect for Rucktion, they’re a brotherhood that are responsible for a huge part of the UK hardcore scene, but the metal and hardcore scenes are pretty separate here, which is a shame. I’d love to see more mixed bills, in the Gorerotted days we did a duel headline show with Knuckledust but the metalheads went to the bar during Knuckledust’s set, and the hardcore dudes went to the bar during our set, which is kinda lame really. Metal’s my thing, I’ll be a metalhead until the day I die, but I love hardcore bands like Agnostic Front, Cro-Mags and Bad Brains too, and I think if people opened their minds a bit they’d find a lot to enjoy there as well.

Trud your bass player is a tattoo artist. Does he usually tattoo the guys from the scene? Did he do all of your ink?
He did my family tribute piece all over my lower leg, and the Black Flag tattoo on my neck, and he also did all of Tim’s pieces. He’s about to do Nate’s first piece too. Every few months I see his latest work and it’s even better than the last, he’s come a long way in five years so I've got many more plans for him to do on me! He’s also doing the artwork for the new album, which is great, yet again that’s another aspect of our band we handle ourselves. Complete control! Anybody interested can check him out at http://www.facebook.com/reverendtrudgilltattooist

What’s the weirdest tattoo he's ever done?
I know he tattooed “I Fucked Your Mum” on some guys arse, who the following weekend actually fucked one of his friend’s mums which is pretty clever. Some guy also had his ex-wife’s name “Mari” tattooed on him, so Trud altered it to say “Calamari and Chips” instead!
Posted by Travis Bickle at 18:54