Some bands are just as tireless and determined as Sisyphus. Dutch death-dealers God Dethroned are for sure such a band. Spitting out extreme album after album for two decades has to bring some serious respect in the metal underground. They haven't rested much since the 2009 album “Passiondale”, returning to the studio and completing another piece of death metal warfare with their ninth record “Under the Sign of the Iron Cross”, which with “Bloody Blasphemy” is their top effort to date. Bass-player Henk “Henke” Zinger discusses about the band.
In 2011 God Dethroned will be 20-years-old. That's a pretty impressive achievement. You are a very hard-working band too. Nine full-lengths is much more than others are able to produce in even more than two decades. Where do you get that energy and inspiration from, what drives you?
Henke: Love for the music I guess. There’s not really an explanation to be honest. We are not dependent on the income of the band, so it’s still kind of a hobby. When you have to tour and make CD’s just to pay your bills, it’s really like a job. Nothing wrong with that, but I think that’s one of the reasons why we still go for it for every album. It’s not a “must”, it’s because we want to do it. 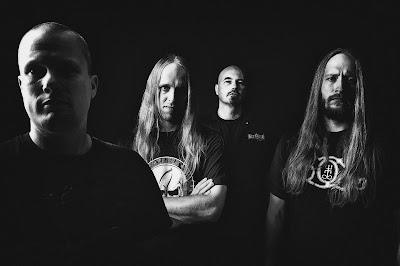 Are you planning anything for the 20th anniversary of the band's formation?
Henke: On Friday 24th of December 2010 in Groningen we had the presentation of “Under The Sign Of The Iron Cross”. I know it's a month later than the release date, but we made it a special show. Because of the 20th anniversary we played songs from every record including some old band-members. Our live sound engineer was the guitar-player on the first God Dethroned ever, so he played two songs together with us from “The Christhunt”. Also a special guest appeared on stage – our producer for the first four albums. We did a Sabbath cover “Children of the Grave” together. As well we had former guitar-player Jens and bass-player Beef from the “Bloody Blasphemy” period on a couple of songs.
“Under the Sign of the Iron Cross” is probably your fastest and most fierce record so far. Can you imagine a God Dethroned album without a blastbeat? Did you ever write a song without a single blastbeat?
Henke: Well, we did that on “The Toxic Touch” album. There are only two songs on that album with blastbeats. But we found out that it’s not really the way God Dethroned should sound. I still like the album, but God Dethroned should sound aggressive, but with melody. That album was just a bit too much melody.

In spite of the numerous line-up changes across the years God Dethroned never lost its sound, its style. Is it because guitarist/vocalist Henri Sattler who is the only original member is an absolute mastermind of the band and a sole general between regular privates?
Henke: Yes and no. Henri’s the mastermind concerning the lyrics and composing the songs. But we all have our input. Everybody is looking for riffs, but it’s Henri who makes songs of those riffs. The funny detail is that this is the first time that the whole album is composed by Henri. Every riff on this record is his, so you can almost speak of a solo record. But he will never do that, because he’s just not like that. And about the general part... he makes the final decisions. You need a leader in a band and it’s pretty obvious that he is that leader. 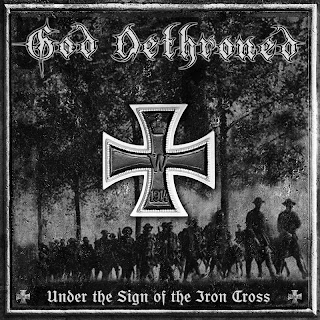 After Henri you are the second longest-serving band member at the moment. There were a lot of changes in the past. Do you feel like staying with God Dethroned until the end?
Henke: I think anyone who joins the band feels like staying until the end at first. Otherwise it's useless to join the band. But it's not always an easy thing to do. It takes a lot of time and it will test your relationship or your “normal” job. A lot of people dream of touring and playing everyday, but forget the circumstances you live in sometimes. Not everyone is meant for this life. I have been lucky to have a girlfriend who understands what I'm doing and that's the same for my day-job. So sometimes people just leave the band because of wrong expectations, but also because they can go to a bigger band so they can pay their bills. Pretty understandable in my opinion.
You have been connected with Metal Blade since 1997 and your second album „The Grand Grimoire”. That is a bloody long time. Do they love you so much or did you sign a long-term contract and became their slaves?
Henke: We had to sell our souls for that deal... no just kidding. We just have a very good contact with Metal Blade and somehow they still like us. So since “The Grand Grimoire” we already have signed three new contracts. That means Metal Blade still believes in us. So why change a winning team right? 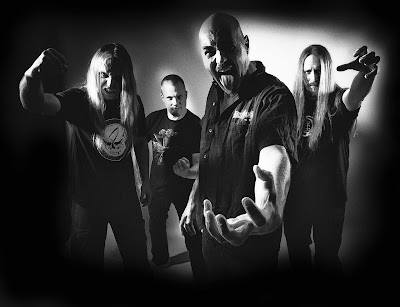 The “Under the Sign...” album focuses on Nazi Germany during World War II. That subject matter has been talked about a million times before. What is your perspective on the subject and what did you want to emphasise?
Henke: That’s not correct. It’s all about World War I, just like our previous album “Passiondale”. Which is a big difference, not only because many bands sing about World War II and not WWI. Somehow people always talk about WWII, but everything in that war originated in WWI. We just wanted to let people see how crazy that war was and how influential. So many strange and weird things happened in that war.

Would you say that “...Of Frost and War” by your fellow-countrymen Hail of Bullets inspired you in any way to write “Under the Sign...”? The similarities in the subject matter, if not in the sound are damn striking!
Henke: Not at all! I mean, I like what they do, but we are doing something totally different in my opinion. We try to show people the craziness of that war. The aggression in that war we tried to put on record. It’s a real story which we try to tell. I think for Hail of Bullets it’s just more a “cool” subject to sing about that really suits their style of music.

Your album “Passiondale” came out in 2009, a year after the Canadian film “Passchendaele”. They both concentrate on one of the biggest battles of WWI that took place in Belgium in 1917. Was it a coincidence?
Henke: Yes, we were busy with the recordings and somehow we found out there was a movie about the same subject. We couldn’t change the name any more. To be honest, we didn’t want to change it. When we were on tour through South America, I know Henri watched it. I believe it’s more a love story than a war movie. I haven’t seen it yet, but I really will watch it one day. 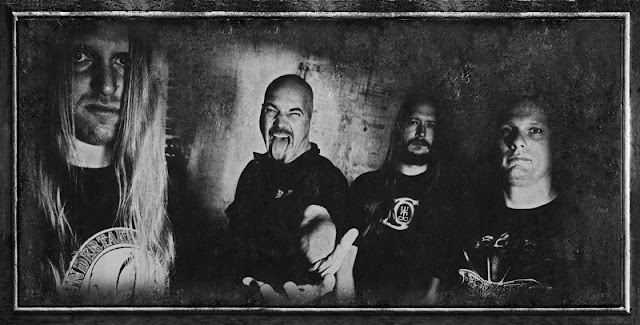 Did you go to the location where the actual battle was fought to feel the atmosphere of the place? I suppose you don't live too far from it.
Henke: The reason why we started writing about this subject is because of our former guitar player Isaac Delahaye. He lives in Ypres in Belgium and that whole region is just one big World War I museum. There are so many things that remind you of that war. Every weekend the place is full of English tourists. There are many cemeteries you can visit and we did go there for the photo shoot. So yes, we really went there to feel the atmosphere so to speak.

You say Belgium is like a living war museum. What about Holland? It was under the occupation of Nazi Germany too. There was a similar amount of war atrocities there as well. Does Dutch society often talks about war, is it still an important every-day topic?
Henke: I live in a place called Westerbork. If you look that up with Google you will find out a lot of information about a former concentration camp, where monuments like the National Westerbork Memorial are located. My parents were little kids during WWII but they remember everything like it happened yesterday. So you can imagine that I grew up surrounded with images and thoughts about WWII. Every year there's a big national liberation day so we will never forget the war. So yes it's still a big thing here in the Netherlands.

What album do you think is your fans' and critiques' favourite? What do they usually ask you to play live? I would venture to say it might be “Bloody Blasphemy”, no?
Henke: It really depends where you are. It seems like every country has its own favourite album. But of course “Bloody Blasphemy” is absolutely one of the albums everyone wants to hear. But it seems that “Passiondale” is doing pretty good too.

What are your favourite war films? I'm pretty sure you are real experts.
Henke: To be honest, I’m not that kind of war “freak” at all. The other guys are way more into the whole war and history. Same with movies. I can’t give you any names of war movies that I have seen lately. I do like to watch Discovery Channel or National Geographic when there are documentaries about war though. 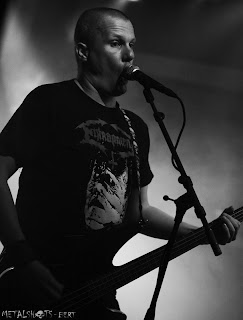 Knowing how fast you are able to work and write songs can another record be expected in 2011? Do you have an idea for the main theme yet?
Henke: Good question! I think for now we just want to play the new songs live. Hopefully we can do some festivals in 2011 to promote the record. Maybe some tours, we will have to wait and see. We will start writing the new album when we feel like it. Could be 2011, but I think not. That would be a bit too fast I guess.

The Dutch metal scene seems to be quite well-organized. So many great bands in a not so huge country. What is a secret of such popularity of metal in Holland?
Henke: We are not a huge country indeed, but we have a lot of citizens. Around 17 million people live in that little country of ours. That's a lot, trust me. So even though it's a very small percentage of people that listen to metal, it's still pretty much for such a small country.
The media likes to say that Holland is a very liberal country. They always brings up drug legalization, gay rights etc. But on the other hand there is a hardcore right opposition to that liberal current. And that brings conflict. Some examples are often racist ruthless football hooligans well-known across the whole Europe or politically-driven murders such as the one of Pim Fortuyn. Do you think Dutch society is very divided? That aggression must be coming from somewhere.
Henke: You just said it all. For the outside world we are a very liberal country, but in fact it's getting less liberal every year. Drug legalization is already pushed back, gay people are getting beaten up more and more. We had a left-wing government for years, but now it's a right-wing orientated government. So maybe it will get even worse, who knows. It's hard to say I guess.
Posted by Travis Bickle at 09:05