UNEARTHLY TRANCE - The Goat, the Trident and the Unholy Spirit

First of all – what a bandname! Can you play silly radio tunes if you're called Unearthly Trance? Definitely not! This New York-based powerhouse trio delivers an ungodly and merciless doom sludge assault completed with the full-of-rage vocals of Ryan Lipynsky, who is the band's frontman and six-string axe-master. If you missed their 2008 opus „Electrocution”, go back to it right now and join the cult. Two years later, the band has put out another tough-as-nails effort through Relapse – the epic „V”. Here is what Ryan has to say about it.

Unearthly Trance has been around for 10 years already. You have recorded five albums and a ton of splits. Do you think you could have done more? Could you briefly summerize that decade?
Ryan: Could we have done more? No, I don't think so. Perhaps we could tour more but that isn't always such a wise choice for bands who want to stick around. This decade has been a steady pace since Darren Verni joined in on drums in 2001. Write, Rehearse, Record. We are a band that has been totally dedicated to our own craft. We have not swayed with the trends like so many do. We have stayed true to our foundation and have taken our listeners on what we like to think of as a journey. With „V” there is some sort of full circle feeling that has occured. 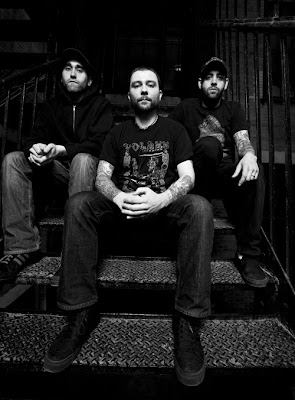 „Electrocution” had pretty clear production. With „V” you went for dirtier, less selective and very underground sound. You wanted it to be really different from „Electrocution”?
Ryan: On „Electrocution” we let pur producer Sanford Parker do everything and we sat back and tried not to interfere too much. On „V” we recorded and mixed a majority of the record under our control. I think „Electrocution” was an album focused more on the vocals and drums and this album was focused more on the power trio vibe of rehearsal and live feeling. On „Electrocution” we tried different studio techniques and Sanford is a professional. I'm proud of both albums. Some don't understand „Electrocution” but perhaps in time, people will see it in the scheme of our career as a unique piece of the whole. „V” is raw, honest, and occult. From here... the unknown. We will never do the same record twice.

You are of Ukrainian descent and live in New York. In that context, I would like to ask about „Little Odessa” film with Tim Roth and Edward Furlong. Do you have any experience of such neighbourhoods or issues?
Ryan: I have never seen this particular movie but I live close to Brighton Beach in Brooklyn. I'm sure those people don't fuck around. I have lived in Brooklyn for quite a while now, but I grew up on Long Island. My only exposure to Ukrainian culture was through my grandparents and the only thing I know is my grandfather liked scotch on the rocks and my grandmother was a hell of a cook. I am half of Welsh and half of Ukrainian descent. So I grew up in a typical lower-middle class Long Island, New York existence, not in an urban ethnic neighborhood.

Brooklyn is well-known for its hardcore scene. Do you feel attached to it in any way? Do you go to hardcore gigs?
Ryan: Lately, I go to DIY hardcore shows through playing in my other band Pollution. Somehow, we fit in with what young kids are doing and are into in Brooklyn. I have an affinity for DIY music as it is the opposite to the corporate scum that rips bands and musicians off. Unearthly Trance has that unique vibe and it must be overwhelming during live performances. What do your concerts look like?
Ryan: Our concerts are usual and an anomaly. Occasionaly we have lots of women attend, sometimes no one shows up, sometimes a whole new crowd of people that we have never seen shows up... Basically, over the past 10 years in New York playing shows we have seen a ton of people come and go and everyone seems to want to „climb the ladder” in „the scene”. Unearthly Trance stays isolated and we focus on our own thing only. We barely even have bands that we like around here. I could count them on my hand.

Do you choose shorter tracks to make it as intense as possible or do you play longer and growing ones as well?
Ryan: This is one of the coolest questions anyone asked in a while! I had to actually sit and think for a bit. Unearthly Trance is fun to play as we all embrace the attitude that our sets will always vary. In fact, I doubt we have played the same exact order of songs ever. Even on tour we change it up every night. I like playing the shorter songs and that is why I have written more over the years in recent times. They work better live. Sometimes if we open for a bigger band we only get 30-35 minutes. So sometimes we will just play 4 songs. It all depends on the vibe of the show and what sounds sounded best at the previous rehearsal. Or sometimes we just call out songs and change the set on stage! In Europe we play for longer on demand. But we like it, as we get treated well over there and we seem to have more of a devoted following overseas. 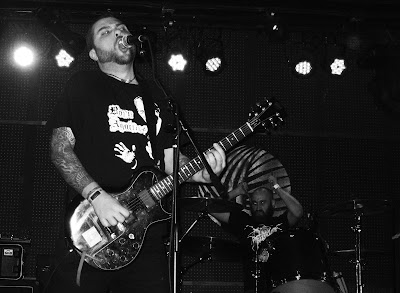 Was the album title „V” a conscious reference to the Saint Vitus record?
Ryan: No more than a reference to a pentagram or venus, or perhaps Crowley's V for Victory to combat the facists. Our „V” is the power of the hidden conquering the oppression of modernity in America. V is for Vengeance don't you know!? The rabbit hole effect is the desired result for the listener’s experience. We want you to wonder what it all means.

You use the symbol of the trident quite a lot in your artwork. What does it stand for and how do you understand it?
Ryan: The trident is of course multifaceted. Simply, we are a three piece and it can been seen as three people joined together to create a unified sonic force. The trident is also associated with Neptune. A symbol of lightning. It can be a weapon used out at sea; the sea is a metaphor the subconscious and metaphysical.

You have done a split with Minsk and recorded Roky Erickson songs. How important is his work to you? Is he an underrated artist?
Ryan: I think Roky is a very underrated artist. His voice used to be incredible. Really haunting and powerful. He wrote some awesome rock songs over the years and he has this unique take on alien/lucifer lyrics. This was a result of the drugs and the cruel shock therapy the powers-that-be subjected him to. First he was tripping and then they locked him up and he connected to demons and supernatural forces. Much respect to Roky and the 13th Floor Elevators. 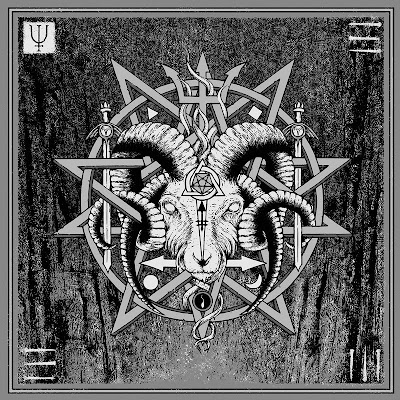 What pushed you to form The Howling Wind at first?
Ryan: The Howling Wind was formed to have an outlet for the kind of material I did with the previous black metal tinged project I did called Thralldom. I like to play more overtly metallic stuff with two guitars sometimes. Being that this has only been a studio band so far. It frees me up to do things I would never do with a live band.

Would you do live shows with The Howling Wind or is it strictly a studio initiative?
Ryan: No live shows right now. We have yet to play live and I am unsure if we ever will. If we do, we will have Carl from Coffinworm help us out on bass or guitar and I think we would probably need another member as well to pull it off properly. Also, there isn't this great demand for us to play. So for now, unless some amazing offer comes through, we will keep it as underground and distant as possible. I very much like not having to go through some of the annoying things that can be brought out being a touring musician.

There are many memorable and epic riffs on your albums since your style is very guitar-oriented. What are your favourite guitar riffs of all time?
Ryan: Cool question. I will probably list things that many would consider obvious but we should never overlook the pioneers of what we call heavy metal. So, it's Black Sabbath's „Black Sabbath”, „Snowblind”, „Symptom of the Universe” and countless others. To be honest, most of my favourite riffs ever have been done by Iommi, Butler and Ward. Others for example: „Procreation of the Wicked” by Celtic Frost, „Black Diamond” by Kiss, „Under a Funeral Moon” by Darkthrone. There are too many to name!
Posted by Travis Bickle at 11:13