BEATEN BACK TO PURE - To Live and Die in Dixie

„I bet you can squeal like a pig. Weeeeeeee!” - that quote from John Boorman's 1972 masterpiece „Deliverance” represents a common view of the Deep South of the US with its eerie environment and rough inhabitants hostile to all strangers. Ben Hogg, vocalist on duty with southern metallers Beaten Back To Pure who fouled this world with nasty records like  "Southern Apocalypse”, as well as frontman of all-star thrash/sludge outfit Birds Of Prey where he bangs his head alongside none other than Erik Larson and Dave Witte, proves that people of the south are not what they are stereotypicaly thought to be. I asked Ben about the future of BBTP and his other bands.

Beaten Back To Pure released its last album so far „The Burning South” in 2004 and it was a hell of a banger. Do you have any desire to make another record together again in the future?
Ben: Man, we've been trying. We had a change at the drum throne this year so that has moved things along on a faster track. Perhaps we've let our side projects get in the way somewhat but we love each other and jamming together. Shit, I've moved seven hours away from our „home base” and I still have every intention of doing my parts when they are ready for me. I think we've got nine songs together for this one. I still got some words to write. All this moving and shit made me pretty slack. 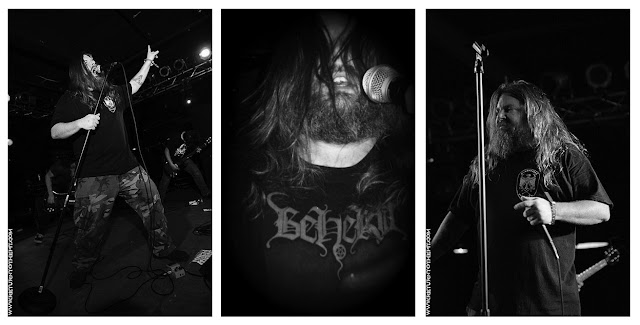 Is it going to be very similar to „The Burning South” with its bluesy, swampy, dirty sound?
Ben: Yeah, we haven't reinvented ourselves, although there are new elements. If the people liked the last couple of records they will probably like this one too. The working title for the album is „Southern By The Disgrace of God”.

Does your band-name mean something specific or is it a word play?
Ben: Mostly just word play. Most people think it has racist overtones, but they are wrong. The name existed prior to us using the confederate flag as imagery. Perhaps that is an unfortunate combination, but fuck anybody that gets caught up in that shit. It's rock and roll, not social commentary. Me and Vince Burke [guitar-player] came up with the name over some beers back in 1998 or so at a bar named Rosy's. It was probably our tenth name we presented to the band mates of the moment and I'm shocked it's the one that stuck.

You managed to complete three albums with Birds Of Prey in only four years. Concerning how busy the guys are, that's pretty impressive. What made you work so fast?
Ben: Well, Birds Of Prey don't take a ton of time in the writing process. Bo Leslie and Erik Larson (guitar-players) write a bunch of what they deem „metal” riffs that don't really have a place in their daily bands [Alabama Thunderpussy and The Last Van Zant], they get together over some beer and arrange them and then we add Dave Witte [drummer of Municipal Waste, Burnt By The Sun] and Summer Welch [bass-player of Baroness] to the mix. All those dudes are completely pro, so they tend to know shit from shine-ola. We then schedule studio time and get the damn thing done.

Who were the first band that started playing sludge metal? Who came up with the genre's name?
Ben: I dunno. Buzzoven and EyeHateGod were definitely at the forefront but they were influenced by somebody. Maybe just Sabbath and punk rock mixed up. As far as the name „sludge metal”, fucked if I know.

Being from Poland that north vs south issue is a bit unclear. All we've heard about is alligators and the civil war. What does it mean to be a southerner?
Ben: It's a general distrust of those we view as „yankees”, who in turn look down their noses at us „hillbillies”. There is still a lot of „fuck you” in the air. I like that. Watch that documentary „Slow Southern Steel” that is being edited as I type this. It's a project of CT from Rwake and Karim from I'm Better Than Everyone Records. There are bound to be thirty different answers to this very same question.

What does Dixieland mean to the people of the south?
Ben: Are you asking me about the song „Dixieland”? Dixie is just another name for the south. Specifically the confederate states. Fuck Kentucky. Sellout motherfuckers. The song is catchy though. „Look away, look away, look away dixieland”.

You have been talking about the reissue of BBTP albums for some time. What's the status on that?
Ben: Originally we were contacted by Relapse because they bought out the old Retribute Records catalog. Unfortunately it looks like it's only gonna be digital versions of the old records with a few exceptions (Rwake's „Hell Is a Door to the Sun”, notably, excellent record). So it appears that that is what's happening with that. 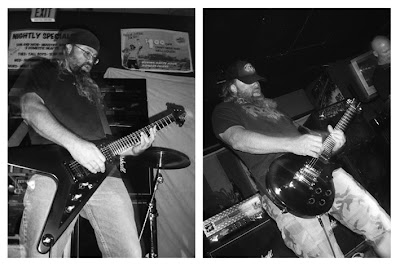 You are also doing the death metal thing with Plague The Suffering. Your 2008 demo „As Bodies Wash Ashore” was quite brutal. Will you go further with the next record?
Ben: Man, when I moved from Virginia that was possibly my biggest regret, I never took them dudes where I thought I'd be able to. I assumed I'd have us a record deal in six months from when I joined and it never materialized. Honestly, drugs really started messing the chemistry of that band up and it became less awesome. When we started, make no mistake, the songs were awesome, but as time tends to do your material can become „dated”. C'est la vie. I do hope they continue on and if I can help them in anyway I will gladly do it. Good dudes in that band too. I've gotten really lucky over the years.

How does a regular day in your hometwon of Norfolk, Virginia look like if you're not doing a gig or a tour?
Ben: In Norfolk I worked as a locksmith for fourteen years. I recently quit, sold my worldly possessions and moved to the mountains of North Carolina. My workday will now consist of scrapping metal and running shine I suppose. We'll see.

Films such as „Deliverance” or „Southern Comfort” try to show the south as dirty, wild and dangerous. Is there a bit of truth in those movies?
Ben: Personally, I have not yet been raped by hill folks or done any raping, so I can't attest to that aspect. Compared to Chicago, New York City, Los Angeles (Compton), Baltimore or Washington DC, it's not any more dangerous. Just a different style of danger.

Where were your last couple of gigs? Where did you play and how did it go?
Ben: My last show was with Plague The Suffering at a venue in Virginia Beach opening for Crowbar. We were awful. Sloppy, fucked up, it was disappointing. Apparently the drummer couldn't hear the guitars but neglected to lemme know so I could tell the sound guy. It was a fucking mess. Some of those songs we had been playing for ages and to fuck it up on that level sucked. We went over pretty well though. Virginia Beach is filled with shitty bands so when anything happens that isn't super-shitty, people are stoked. It was too big a crowd and my going out show, I wish it had gone better. I did fuck with the set-list at the last second and that may have thrown the dudes off too. What's done is done.

When was the last Beaten Back To Pure gig and what songs did you play?
Ben: I'm not 100% sure. It was something local in Virginia. Our setlist has some of the following normally: „One Shovel and a Place to Die”, „Last Refuge of the Sons of Bitches”, „Wheels Coming Off”, „Smothered in Sundress”, „Whores Bath”, „American Vermin”, „Where the Sewer Meets the Sea”, „Tremors Beneath the Skin”... shit like that. „Paleface” sometimes. Some other shit.

What is your favourite Black Sabbath record and why?
Ben: Man, that's tough. I really liked „Born Again”. It was my first Sabbath exposure, I was twelve. But as I went backwards I guess „Master of Reality” might win. Or „Vol. 4”. I loved that savage nasty production. „Sabotage” has some high points as well. I own them all, so I have no need to pick favorites. What is not my favorite is anything after „Born Again”. „Tyr” and „Headless Cross”, etc...

Your three favourite records of 2010?
Ben: Hmmmm... I haven't listened to as much music this year as in years past, but lemme see. I liked the new Burzum and Beherit records a lot. Freakhate had a killer album I think it came out in 2010 [„It Comes from the Grave” came out in late 2009]. New Cough is killer. I have yet to hear new Electric Wizard, probably great. That's a few I think most of ya'll should be familiar with. If ya ain't heard Freakhate, you should. Sick.
Posted by Travis Bickle at 19:59