INDIAN – Guilty Of Being Sludge 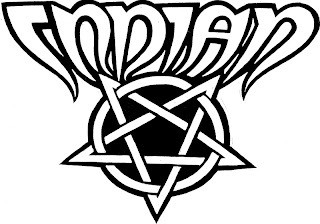 Chicago-based sludge metal mongers Indian took the sub-genre to its limits of raw heaviness and sheer brutality with their fourth studio record “Guiltless”, which was released through Relapse in April of 2011. Devastating and hammering riffage, extreme vocal abuse and suffocating tempos are what Indian is about. The weak don’t come out of there alive. Will Lindsay, on duty as a guitarist and vocalist, and earlier involved in the Wolves in the Throne Room and Nachtmystium, told We Wither about his bands and other extremely important issues.

I have to tell you „Guiltless” is a ruthless, merciless, radical album. You don’t play blast beats or participate in the metal-racing contest but still it’s very extreme. Is it your heaviest album so far?
I feel that it is, but various people will no doubt have various opinions. A lot of people into Indian still swear by “The Unquiet Sky” as the heaviest. 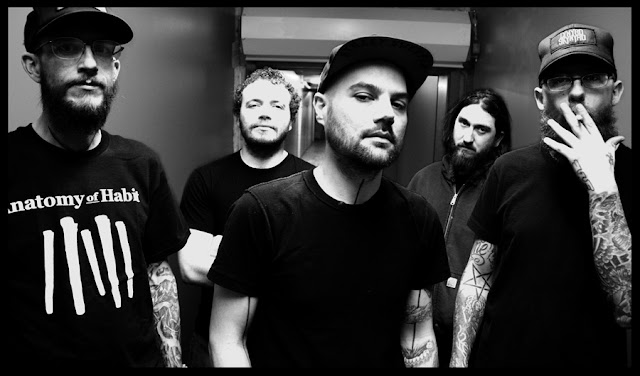 How do you get such a heavy sound? Is it only a matter of production?
Production certainly plays a role in the heavy sound. The equipment that we use is very crucial to the heavy sound, as well. The guitars were Les Pauls, a Monson Doomsayer and a Lakland bass. The amps were Sunn Model Ts, a Marshall JCM 800 2203 and an Acoustic 370. The cabinets and drums were all Emperors. Sanford's expertise and knowledge as an engineer was very important, as well.

Does the album have a concept in terms of the lyrics? Could you point out the most important things you sing about on “Guiltless”?
There is a concept through the album but Dylan wrote almost all of the lyrics and I wouldn't feel comfortable commenting on what he wrote. The lyrics that I wrote tie into the concept of being guiltless and are about a personal experience in my not-too-distant past. I'm afraid it is something I can't really get into, though, as I wouldn't want to name or embarrass the people involved in the aforementioned experience.

Does your band name mean that you identify with the native Americans in the way you feel like rejects and misfits, or is that explanation a little bit too obvious and naive?
The band started before I was a member and I never have asked why they chose that name. I would imagine that it is something other than the idea that you mentioned, though.

Is there a distinct line between doom and sludge in modern metal? What would you rather call Indian?
I don't really have an opinion. However, a lot of other people seem to. I personally don't have a preference in which term people use to describe us. Whatever is going to help them make sense of what we're doing or whatever is going to give them a comfortable reference point is on them.

You have been recording with Sanford Parker, who has produced lots of awesome albums is the last couple of years. What is the best thing about working with him?
Sanford is a good friend of ours. There are a lot of great things about working with him. He's actively involved in the “scene” or “genre” or whatever beyond his role as an engineer. He has a lot of good ideas and he is not afraid to voice them. He also has a high level of tolerance for people and their idiosyncrasies, which is a key and often overlooked element of being an engineer. 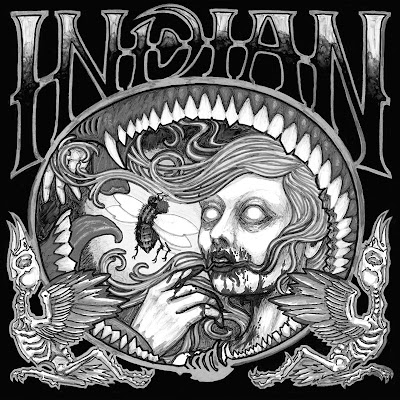 I really like your artwork. I generally love bands that stick to certain aesthetics and develop it from album to album. Could you tell me about the graphic artists you have worked with?
The only artist we have worked with for our album-related stuff has been Scott Fricke. He is a tattooist here in Chicago and a good friend of the band. Scott has been very good at making visual representations of our music and ideas. He actually spent some time at the studio with us to get his ideas for what to do with the artwork for “Guiltless”.

You seem to love tattoos and all of the Indian covers look like perfect ideas for a tattoo. Did you get any of them inked yet?
I have the pentagram that we use for our logo on my shoulder. Everyone in the band with the exception of Sean has the pentagram. I don't know that I would get album-specific tattoos, but I do love Scott's style and look forward to having him tattoo me in the future.

Are any of your tattoos related to the music or bands in general?
I have four Black Flag tattoos. I also have the word “Outlaw” tattooed on my wrist, which has a lot of meanings. One of which is a nod to Waylon Jennings. I also have a portrait of Hank Williams, Sr. tattooed on me.

What made you go vegan? Did you ever care about bands such as Day of Suffering or Earth Crisis, which try to talk about social problems?
I became a vegan in 1997 for ethical reasons. It was just something that I didn't want to take part in anymore. I grew up hunting and fishing and had never felt entirely comfortable with it, which also contributed, albeit in a more latent fashion. I still have the same ethical feelings but it isn't something I really go flaunting about and I certainly have no intention of using the band as a platform for that or any other ideology.
I never cared for the bands you mentioned. Bands that were talking about social problems and such that I was into were more along the lines of Born Against, Man is the Bastard, Noothgrush and the like. All of which are still bands I still love.

Why did Middian only manage to complete one album “Age Eternal” in 2007? Was Mike Scheidt too busy with Yob to keep Middian going?
I was actually talking to my friend that booked that band last week about things. The band seemed kind of cursed from the start. There were always some underlying personal tensions that really flared up when our lawsuit happened and it is ultimately what killed the band. I think the band not being universally accepted in Yob's place is what also led Mike to reform Yob. Our last tour, half of our set was Yob songs. That really kind of put the writing on the wall. That and the fact that the law suit really kind of pulled us apart. It was too bad. I really miss playing with both Mike and Scott.

You were involved with the 2009 Wolves in the Throne Room album “Black Cascade”. Was it just an episode for you? Why did you leave the band so quickly?
I was also on the “Malevolent Grain” EP and the “Live at Roadburn 2008”. I played with them for a few years and did not join the band with the intention of it being solely an episode. My leaving the band is rather complicated to explain without having to tell some details that are really not to be shared publicly. The best I can do is state that the Weavers and I have different ways of looking at a lot of things. We did try to make it work and it didn't. Unfortunately, I don't think any of us feel very good about how everything ended up, but we did the best that we could. We're still friends and keep in touch and see each other when we're in town, which I am very happy about.

Wolves in the Throne Room is seen as a pretty specific band, with its own sound and atmosphere. Did you feel it was something special to be a part of it?
I never really thought of it in terms like that. I enjoyed playing with them and I particularly enjoyed all of the travel we did together. One of the points of contention between us is that I never cared for the visual aesthetics that the band had or the talk about spirituality/magic/etc., which is very important to Nathan and Aaron as well as a lot of people that like the band. It was a good experience and I'm happy that I did it. Ultimately, Aaron and Nathan are happier not having a dissenting opinion and I'm happier playing with people that I have more in common with. I must add that I am also happy to not be involved in the black metal scene. It's not a scene I was ever particularly interested in as a fan or musician, with a few exceptions.

You were also part of Nachtmystium during sessions for the 2010 album “Addicts: Black Meddle Pt. II”. That material is really original and different to anything else. Was the recording inspiring too?
I don't know that I would use the word “inspiring”. I had a lot of fun making that record. Usually, I don't enjoy the recording process, although I am certainly happy to have the finished product. I think part of what was so enjoyable about making that record is that I wasn't emotionally involved as I was never really a member of the band or anything. It ended up being a lot more casual than any other recording session I've done, which I think definitely contributed to the final product. Blake is extremely open to other people's suggestions and ideas as well.
Posted by Travis Bickle at 08:02