If anyone ever thought death metal was actually dead, the Norwegian quartet Obliteration reignited the faith in the filthy repulsive sound, dedicated to the old school traditions founded by Autopsy or Possessed, with its 2009 longplayer “Nekropsalms”. Sindre Solem, the band’s guitar man and vocalist, who’s also on duty in thrash death dealers Nekromantheon, speaks about the early days, the future record and their hometown of Kolbotn, also the base of legendary duo Darkthrone.

You made an impact with “Nekropsalms”. Did you feel that it was going to be something special when you were writing and recording the album?
Thanks man. Na, I’m not sure. We thought the record sounded cool and that the songs were great, and I remember we talked about how people would react to the album and so forth, but I don’t think we thought that it would be a special album when we recorded it. But we knew that it would turn out good, at least better than our first album, hahaha. 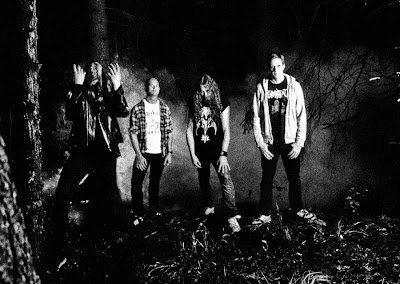 You’re a relatively young band, which more or less came out of the blue and delivered a fantastic record. Do you feel the expectations about your future that the press and fans might create?
Yeah, we’re in our early twenties. Wouldn’t say we came out of the blue. We’d been around the Norwegian scene for at least 5-6 years and our first album got good reviews in Europe. But I see your point. Yeah, we feel it alright. Before “Nekropsalms” we had no press, no label pushing us or anything, but now we have a new label (Indie Recordings) and a Norwegian booking agent stressing us with questions about when our next album will be out, haha. And it seems like people all over loved the album, so we have a job to do not letting them down. But we don’t care, we wanna do an album we are happy with, not just to please people. So our upcoming album will not be another “Nekropsalms”, it will be different. Some will love it, others will hate it.
Fysisk Format published some other awesome bands beside Obliteration like Haust and Okkultokrati. The Norwegian scene seems to be full of young eager bands. Do you feel there’s a lot of good local bands around that will get bigger soon?
Yeah, there’s a lot of great younger bands out there now, especially in Scandinavia, but also all over the world. There’s a good underground movement, but how I see it, it’s still the old bands controlling the metal scene. But it seems like the new generation are slowly coming forth, so I hope bigger labels/festivals and so forth will take a chance and support the new breed of extreme metal bands. This has already begun in Sweden with In Solitude and Enforcer signing with big labels for example, and now us signing with Indie Recordings. “New” bands on the rise now are Deathhammer, Black Magic, Execration, Morbus Chron, Maim, Bastard Priest, Natur, Diskord, Salute, Saturnlia Temple, Beasmilk, Swallowed, Krypts and many more!

Your 2007 debut “Perpetual Decay” came out on Nocturno Culto’s label Tyrant Syndicate. How did it happen, how did you guys meet?
Since we’re from the same town, we gave Fenriz our first demo, and we’ve been in contact ever since. We’ve traded music over the years, and after a rehearsal demo we did, Nocturno decided to sign us to their newfound label. It was a glorious time, fantastic guys. Too bad the label didn’t get to continue. Still in contact with them, fantastic dudes with the best musical taste ever.

“Nekropsalms” was recorded and produced by yourself in your own studio. That sounds like a dream come true. You’re a very self-sufficient and independent band. Is there anyone you would like to learn from?
It’s great indeed. Kick from Nekromantheon and Arild (guitarist for both bands) own it together. Shit, there’s plenty we’d like to learn from with it comes to recording techniques, but some of the charm and the edge of our sound comes from doing it our own way, and figuring stuff out as it goes along. But there are loads of cool bands and engineers we would love to learn a trick or two from when it comes to sound/production. Like the dudes who recorded Autopsy’s “Mental Funeral” and Black Sabbath’s “Master of Reality”. But we’re lucky enough to know many cool sound guys here in Norway that offer loads of cool tips to us. The dream move for us is to get a 24-track tape recorder into the studio, but it’s extremely expensive and hard to maintain, so I guess that not will be in the near future, haha.

You have signed with Indie Recordings for your third album. Is it possible to make a better album than “Nekropsalms”? Are you going in the direction of longer songs like “The Spawn of a Dying Kind” and “The Worm that Gnaws in the Night”?
Of course, it’s possible! There are already hundreds of albums better than “Nekropsalms” out there. But the important thing for us is to avoid copying “Nekropsalms”, and try to do something different. But we don’t plan it too much, it’s important to just go with the flow, let the songs live lives of their own. I think we’re heading more in the direction of those tracks yeah, darker stuff that are not pure death metal. I want to make something that sounds unique, without being fancy about it, and yet sound old school. But we just let it rip, jamming the songs together. And it’s important for us to listen to loads of different types of music, so the inspiration comes naturally. But on where we stand now with the writing, the tracks seem to develop in a darker manner than “Nekropsalms”, yet very punk at the same time. We’ll see how it turns out. Hopefully we can record the upcoming album this summer. 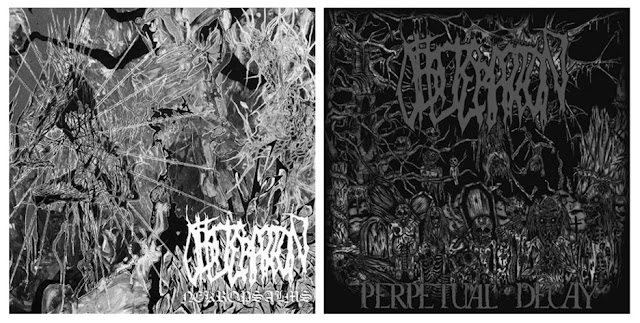 If you started playing metal in 2001, you were kids at the time because even now you’re young guys. What made you start that early? Maybe dad bought you “Reign in Blood” for your tenth birthday?
My mom always pushed me to play an instrument, so after playing piano for a while when I was a kid, Arild and I jumped over to learning guitar instead. And that spiked us to start a band at an early age. It wasn’t too serious at first, we played covers of tracks we heard in skateboard movies and such. Hearing The Misfits, Bad Religion and AC/DC and so on in skate movies, our musical interest grew, and suddenly music took over our lives and skateboarding faded. We didn’t get much cool stuff from our parents, except that Arild got a Jimi Hendrix album from his dad. Didn’t take long before we found heavier stuff, and it grew from there.

You have some serious competition. Autopsy recorded its first new album in 16 years. Do you think you can beat them with your next record?
Haha, no, I don’t think so. Our stuff will sound very different I hope, while Autopsy will sound like Autopsy. “The Tomb Within” EP fucking kills! “Seven Skulls”! We will of course try to make an equally good album, but we’ll see. Those guys are sick geniuses. 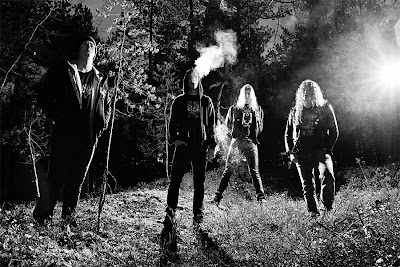 Kolbotn is a very small city just outside of Oslo, but it seems to be a true metal goldmine. Darkthrone, Aura Noir, Lamented Souls and you come from there. What is it like? Does everyone in Kolbotn listen to black and death metal?
It’s a small suburb outside Oslo. Not much to it, but the scene for young bands starting up is good, since there’s youth clubs where they can rehearse for free, like we did when we were kids. Other than that it’s kinda boring, but it has nature/forests close by, plus it’s close to Oslo, so we get a nice mix of solitude and chaos perhaps. Haha, not everyone here is into metal, but there are some sickos here that make good shit and listen to the right stuff. A music reporter thought it might be something in the water here, since all the bands from the area sound so fierce and good. But I don’t know. Happy to live here anyways.

Besides Obliteration, you and Arild play in Nekromantheon. Were some of the ideas you created unsuitable for Obliteration? Was that the reason you formed another band?
That’s not why Nekromantheon was summoned. Arild and Kick started out as a black metal outfit sometime during high school. I filled in on bass or vocals at some rehearsals. After a while they figured out that they wanted to play intense and angry thrash metal instead, and they asked me to join on bass, and a guy called Glen on vocals, who now plays in hardcore band Rabalder. This was long before Obliteration’s first album got released. Now perhaps we use riffs that are left over from the other band (it goes both ways), but the philosophy behind the band and the way of writing music differs a lot from Nekromantheon to Obliteration. In Obliteration, we can include everything, no boundaries what so ever, evil has no boundaries. But in Nekromantheon, we’re strict making die hard old school evil thrash metal in the vein of Dark Angel, Aura Noir, Possessed, Slayer, the first two Sepultura records, Sadus, Sacrifice, Slaugther, Voivod, the first two Destruction records and many more. Hails!
Posted by Travis Bickle at 12:17