MASSEMORD – Sworn to the Black

From the depths of Poland’s Silesia comes the black metal bastard of Massemord. A band of attitude and nonconformism. Their two heavy strikes of albums – “Let the World Burn” (2007) and “The Whore of Hate” (2008) – chopped off the ears and carved out the eyes in a hyperblasting fashion of brutality. Their latest offering, released in late 2010, „The Madness Tongue Devouring Juices of Livid Hope” is a monstrous slab of drug overdose, hypnotic tempos and nihilism. Vocalist Namtar answered the questions about Massemord as well Furia, those black metal primitives whose line-up consists of four fifths of Massemord.

Your latest album „The Madness Tongue Devouring Juices of Livid Hope” is one 35-minute-long track. Is it a form of rejection of metal clichés and routines?
I didn't know there were any routines in metal. Maybe that's because I always liked „Deathcrush” and „Filosofem” at the same time. We don't do anything just for sake of it. We didn't want to piss off people on purpose. The form of the latest album came out naturally and it didn't take us a great deal of time to make it what it is. Our guitarist Nihil came up with the idea and we were blown away. The first listening was overwhelming. People see it as a manifesto, as a sort of provocation but it was only our state of mind in 2010. Our e-fans on the internet say that now it's hard to predict what we're going to do on the next album. No comment.

How did you manage not to play a single blast beat in more than half an hour?
Priest our drummer recorded the whole thing playing with just one hand. We had to cuff the other one to the radiator, so you can hear on the album that he’s fighting with it. There was a bet. He lost it so he had to accept the fact that he wouldn’t be showing off on this one. To give him some extra shit we fucked up the sound of his drums on purpose.

Have you already played „The Madness Tongue...” live in its entirety?
We're thinking about it but we're not sure that the world is ready yet. And there really aren’t enough drugs going around at the moment to take such a show, and even if we had the right resources we would probably use them ourselves and get fucked up to death.

Could you summarize Massemord's and Furia's 2010?
We were mainly under the influence of Basshunter last year. I think we didn't meet expectations with both bands, since we recorded stuff people hardly accepted. We gave blast beats a miss this time. The most sophisticated technique wasn't our goal either. We skipped the promo photo sessions again. The rest remained the same, just another year closer to death.

Can you actually speak about any sort of success in terms of such extreme bands as Massemord or Furia?
It's not up to me to estimate that. I don't really know what success means. Is it a couple of thousands of albums sold or listens on last.fm? Those figures are an abstraction. If you check how many people come to our shows, our popularity is somehow countable but the result is pretty shitty. Success to me is artistic freedom. We don't give a toss about anything. We only care about what we want to do.

Does black metal allow that artistic freedom? Did you ever say during rehearsal: „this bit is not black metal enough, let's forget it”?
We have never done such a thing. It doesn't matter to us if our music isn't what black metal people generally expect. We don't lose any sleep over that. Anything we do, it's always going to be black metal. We're the apostles of the new religion, which is overcoming the limits and weaknesses of the social norms, standards and conventions that make us what we are. We have defined the barriers of what we do and it's a sort of our quasi-ideology.

Do you care about reviews and the press? Do you feel misunderstood?
We feel that constantly. We don't need to read any reviews to feel it. We have created a vehicle, which is going very fast and no one is able to keep up with us. It's sometimes even hard for us. We're chasing each other because we tend to easily go off and depart into absurdity. We are usually seen as icons or bored artists, but we don't care about any of that.

Massemord is almost ten years old. Are you slowly coming to an end with it?
Well, Massemord was formed around 2002, that was a big break, we got enlightened. Nihil had most of the rotten ideas in his head and they exploded. Everything we do is spontaneous and we don't store music. We write, play and record on the spot. It's all in the moment. We might be doing it until we shit ourselves or die.

Being a metal-head in conservative, catholic Poland was always tough. Did it change in the last ten years?
Fuck the metal-heads. I don't give a fuck about that. We tend not to be associated with any group or sub-culture since we don't identify with them. Metal-heads say one should be against the dogmas and the preaching of the priesthood, but look how serious and important it is for them to maintain the metal dress-code. It's ridiculous. If you stand for individuality, just be yourself – that's it. To make it clear: I'm for individualism but not for the tolerance of somebody else's individualism [laughing]. 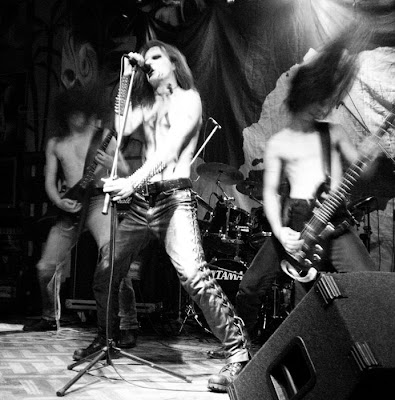 Gene Hoglan said drumming is mainly a mental, not a physical activity. How are you doing behind the drums in Furia?
I think he could use some physical exercises because his figure looks grotesque behind the drum set. Which doesn't change the fact that his skills rule and, compared to him, I'm only an average craftsman, a vocalist who was trying to kill time when the guitarists were boring me to death writing riffs. That was a couple of years ago and I'm still making a little progress from time to time. My drumming is quite shitty, so for me it's still 100% physical. It's a pleasant struggle against the weakness of my body.

It seems that Darkthrone are doing everything to put off as many listeners as possible with their latest offerings. Do you think people would still make a fuss about their newer records if it was some other band?
Since Immanuel Kant, it's a well-known fact that it's a subject who decides about the aesthetic value of the object. I don't care if people like the newer Darkthrone. I respect the guys for being against the trends, the clear production and being true to fake origins of black metal. On the other hand, I don't think Fenriz cares about messing with anybody. He just does what he feels like doing. But you're partly right – if not for the Darkthrone logo, their stuff would probably be forgotten the second it was released. The same story with Vader – it doesn't matter they have recorded the same album for the seventh time – people will still get really excited about it.

What records inspired Massemord?
There’s a ton of them. I could name hundreds literally. If you want me to give you a concrete answer, I'm going to say that the Norwegian scene was a big sick influence on us. Nihil and myself were devastated by „Nattestid Ser Porten Vid” [1999 album by Taake] and we were listening to it in almost the same place it was recorded.

You're involved in lots of bands. Do you have any spare time for a social life?
I don't have a regular job and have no family either, except for my far cousins from Finlandia and Russia. I'm not really that busy with the bands. Most of them don't consume so much time. I'm not chasing new projects, I'm not really writing any music and I don't need new friends. I like to do something cool but only if the people involved are representing what I respect.

Are there many underrated band on the Polish scene?
I would rather say there are lots of overrated ones. Metal-heads usually have shitty taste and they often don’t see the real value of music. Most of the bands have a PR specialist because it's publicity that counts. We don't give a toss. If they want to participate in such a scene they're free to do so but we're walking away from this. I'm not going to tell you what bands are underrated in my opinion because I don't want to promote anyone. Every band for themselves. They need to work hard and gain respect.

Does the industrial character of Silesia make an impact on your music?
It's hard to say but I'm sure everything we experience makes our music and lyrics the way they are. We're surrounded by the forests of factory chimneys, grey snow and environmental and social degradation. It's difficult not to be influenced by it. Silesia is important to us. It has chosen us. It wasn’t our decision. Coal mines, which are here in high numbers, make this place closer to hell and that might be the reason that Silesia is that way. Anyway, we hate the people from outside of Silesia.
Posted by Travis Bickle at 18:52