This is the sixth part of the series of short interviews with prolific and notable extreme doom metal musicians. They were all asked the same questions to see the different perspective they have for specific aspects of the genre. I spoke to Lasse Pyykkö of Hooded Menace, a band’s mastermind, main writer, guitar player and vocalist from time to time who as well was or still is involved in such creepy death metal acts as Phlegethon, Vacant Coffin, Claws or Acid Witch. Finnish doom metal was always on top of the game and so is Hooded Menace with its heavy rocking mixture of colossal riffage and obscure terror-ridden vocals. Both of their records 2008’s “Fulfill the Curse” and 2010’s “Never Cross the Dead” brought loads of classic doom worship and horror film obsession. They have also released splits with Coffins, Ilsa and Asphyx. Lasse speaks about doom metal.
What was your first experience with extremely slow doom metal?

Teemu, our main contact guy in the early Phlegethon days, got Cathedral demo through tape trading when it was put out. It was definitely extreme doom at the time. Painfully slow and heavy songs with weird sort of an half-grunted vocals. I really liked it a lot. 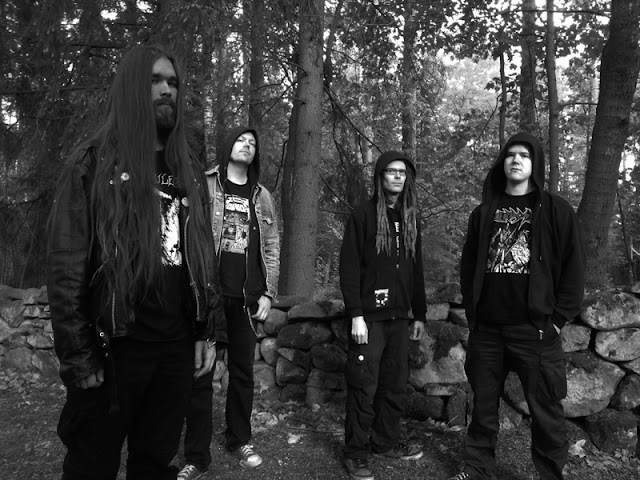 What inspire you to play such music?
I have always dug the rugged and forlorn vibes of doom. When I heard "Epicus Doomicus Metallicus" by Candlemass for the first time in the late 80’s it blew me away! We used to jam their songs such as "Solitude", "Mirror Mirror" and "A Tale of Creation" at Phlegethon rehearsals. We loved that stuff! So Candlemass and particularly their debut album sowed the seeds of doom in me. Of course we must not forget that Black Sabbath was on a heavy rotation on our record players and tape decks before any other doomy stuff. When I write for Hooded Menace I don’t have to feel desperate or pissed off. Pretty much the opposite actually. I need to be giddy with anticipation and just excited to express these desolate, creepy and menacing vibes. Horror movies and soundtracks are definitely a source for the musical and especially lyrical and visual inspiration but first and foremost the music upwells from the heavy music I grew up with. Albums such as "Forest of Equilibrium" by Cathedral, all the first four albums by Candlemass, "The Rack" by Asphyx, "Severed Survival" and "Mental Funeral" by Autopsy, two first Paradise Lost albums, 80’s Maiden, good old classic and epic Metallica, Black Sabbath classics just to mention a few. I know this might sound a bit cheesy but also wandering in well preserved medieval cities kinda puts me in a doomy mode. Gimme a gothic cathedral and that does it, haha! We should get to record in one of those things, haha!

What is the most important in Hooded Menace – is it the heaviness, the atmosphere, the lyrics or maybe something else?
All together but if I had to choose one thing I’d say soul. Without it you are on a feeble ground and you can give it up already.
Do you see your music as a very demanding one for the listener?
Well, if you are a fan of doom and real death metal then our music shouldn’t be too demanding for you. After all our songs are pretty catchy and memorably. There is diversity in the riffs and tempos. Doom purists might have hard time coping with our vocals but hey, we are a death/doom band so what do you expect? One more Ozzy clone?

Is extreme/funeral doom metal more over the top and extreme than super fast grindcore in your opinion?
I’m not following those scenes much but certainly both are pushing the envelope. Personally I enjoy more grindcore (mostly old stuff and to me that is "superfast" or say fast enough!) more than funeral doom which I never really got into. I do get the point of this style but I just find plain funeral doom pretty boring. I’m a bit behind of the modern grindcore scene and it’s bpm. To me Napalm Death’s "Scum" and "From Enslavement to Obliteration" are still very extreme, chaotic and totally relevant stuff. Yeah, I’m an old fart, tell me about it, haha
Is doom metal a state of mind or just another sub-genre of metal?
Yeah I guess you need to have a certain kind of state of mind/approach to play doom. So many metalheads still find it utterly boring music to play or to listen to. Some just cannot relate to the forlorn, rugged and monumental vibes of doom at all. It’s definitely not for everyone which only makes the genre even more fascinating to all us who "get" it.

Did you ever feel like a misfit or a reject in the metal scene?
I have always felt more or less like a misfit in my life. I don’t follow the scene too much. Idiots dwell in every community. You bet I know a tool or two in the underground metal scene that are more obsessed with drama and talking crap about everyone than the actual music. I have my persistently growing connections in the metal scene that I interactive with and have good time with.

Can you relate to escapism?
Sure. With the art comes the relief. It’s an escape from reality which is something we all need every now and then I guess. Let it be music, movies, painting or whatever. It’s not that I cannot cope with everyday life. It’s got more to do with my imagination than depression and such.
Posted by Travis Bickle at 20:51