This is the eight part of the series of short interviews with prolific and notable extreme doom metal musicians. They were all asked the same questions to see the different perspective they have for specific aspects of the genre. I spoke to Brendan Roache, bass player for Irish doom warriors Mourning Beloveth. Such records as “Dust”, “The Sullen Sulcus” and “A Murderous Circus” established them in the underground. “A Disease for the Ages”, their fourth full-length released in 2008 is another epic slab of the finest funeral doom mastery. The band is currently working on its follower. Brendan answers the questions about doom. 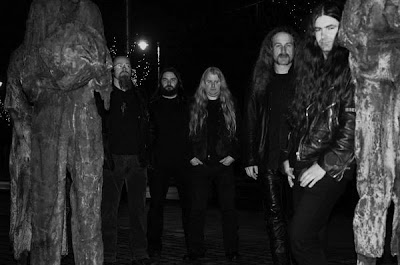 What was your first experience with extremely slow doom metal?
Besides the likes of Black Sabbath, probably my first experience with extremely slow doom would have been the early 90’s explosion with the likes of Cathedral, Anathema, Paradise Lost, or My Dying Bride. The Peacevile revolution I guess you could say. I was only a young teenager at the time, well into the likes of Obituary, Morbid Angel and Bolt Thrower and all the big death metal bands of the time. Those days were obviously well before the internet and discovering new and more obscure underground stuff, whatever the sub-genre of metal it was supposedly belong to, was a time-consuming, sometimes frustrating, but altogether a much more satisfying experience. Most of my discoveries were from word of mouth of friends, distro lists, zines. Black Tears distro being of particular importance to me. There was no magic mouse click to bring all the information you wanted up on a screen in front of you. A major amount of time and effort was required to find out even the most basic info on any band in the underground, where ultra slow doom most defiantly belonged back then. But as with everything in life, the more you put into it, the more rewarding each new find was. All that is gone now I think…
What inspire you to play such music?
Easy. The first time I ever heard “Turn Loose the Swans” by MDB. It was on double LP and it was in my friends house. It belonged to her older brother, and to say it knocked the socks off me would be an understatement! Its impact on me was second only to discovering heavy metal in the first place, several years previous. As I’ve already mentioned I was a committed death metal freak and that whole scene was so overtly macho, all satan, gore rape etc. The very first time I heard that album it struck me that here was this monumental piece of work, that not only abandoned that macho ethic and image but blatantly shat on it. Here was this guy singing, actually singing about stuff most teenage lads would be mortified to even admit feeling in private, never mind actually sing out loud, and lay bare on record. On a metal record for that matter! It was brave, dangerous, heartfelt, intelligent and most of all, honest. That’s the one single thing that struck me the most. The absolute honesty of the whole thing. Not only in the lyrics, but the structure and atmosphere of the music too. It was everything I never knew I wanted from metal music. There was no bravado in the songs, everything was there simply to compliment the songs themselves. No insane blastbeats for the sake of it. No demonic shredding solos. Just feeling, atmosphere, purpose and deliberate intention. Take one element of all that away from the record and it fails. It was to me the first truly complete record I’d ever heard. I fucking loved it. And I wanted to meet people who heard what I heard in that record too. That was 18 years ago.

What is the most important in Mourning Beloveth – is it the heaviness, the atmosphere, the lyrics or maybe something else?
The most important thing for me is the people involved in the process of creating what everyone else hears in our records. Without those people, it simply wouldn’t be Mourning Beloveth, weather your talking about the classic line up responsible for the first three albums, or the current line up, knee deep in writing the next record as I type. How we interact with each other, interpret each others ideas, how we argue and disagree and how we eventually pull it all together at the very last minute. It all stems from these five very different individuals. How we trust each other to do what needs to be done. So all the heaviness, atmosphere, lyrics, concepts all come from within us as a band.
Do you see your music as a very demanding one for the listener?

I hope so! But a question like that can’t really be answered by any one person. It’s all completely subjective. Every person that hears any of our songs is going to have their own opinions on it. And for that person, that’s the correct opinion. At the end of it all, once we put our music out there to the public, it doesn’t matter what we think. All we can really hope for, or expect, is that people spend some time with it, digest it. Its not pop music, it requires more than five minutes of attention. The biggest compliment we hear from people is that they spend hours, days out of their very finite existence listening to our music. Because each of our albums represent years out of our very finite lives to create it. Once it goes public so to speak, everyone’s opinion is as valid as the next. And we don’t pay attention to any of them.

Is extreme/funeral doom metal more over the top and extreme than super fast grindcore in your opinion?
Hahaha, who honestly gives a flying fuck? I like what I like, whatever genre purists would label it. Fastest, slowest, heaviest, most insane, most over the top are accolades only people that can’t write a good song are concerned with. Let them have their awards. We have the songs.
Is doom metal a state of mind or just another sub-genre of metal?
Speaking only from my own point of view, it’s a state of mind, a personality. Anything that is genre is by extension generic. I prefer music or any form of art or expression to be honest, without playing for the gallery so to speak. When we plug in, we play what we feel. It mostly happens to be doom, but that’s just what comes out of us. And you can really tell when something is done from the heart. Everything else is a waste of my time to consider.

Did you ever feel like a misfit or a reject in the metal scene?
Not in the least. I have a life. I have a circle of friends who I happily share a drink with and trade insults and occasional punches with. I play in a music group of my peers who I respect and feel privileged to be a part of. That group has no constraints or limits except for ourselves. It’s all I’ve ever wanted. 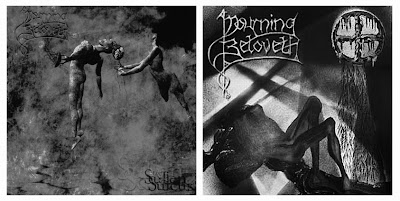 Can you relate to escapism?
Oh course. I feel sorry for those that don’t or can’t. I don’t dwell in some fantasy or make believe world. What flies around in my brain on a daily basis is what keeps me amused and entertained while doing what needs to be done to put food on my table and beer in my glass.
Posted by Travis Bickle at 21:14